If you’re looking for a Canadian soldier’s view of World War II you probably won’t think of one written by a Canadian Naturalist. But in the case of Farley Mowat’s The Regiment you won’t regret making this choice. 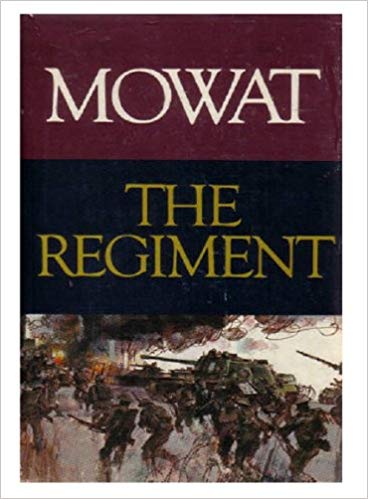 The Regiment was first published in 1955 and follows one regiment throughout the war.  Much of the book is devoted to the Italian Campaign where Canada was engaged for nearly two years and lost 6,000 soldiers.

Mowat makes clear in the foreword of the Regiment that it is not the official historical record of an entire campaign, but rather the story of one regiment and the men who formed it.

“The story of an infantry regiment has a hundred facets; some obvious, and other most obscure. The majority of those that have been turned to the public eye have particularly disclosed what is heroic, what is glittering in deed and memory; or, in sharp contrast, they have reflected what is grotesque and bestial in war and in the men who fight in war.

Yet neither the dark mirror of an obsessed realism nor the shallow one of a determined romanticism properly reflects the true shape of that amorphous but vital creation of men’s emotions – which is called the regiment.”

Mowat was a platoon commander in Italy and was eventually promoted to the rank of Captain. Mowat took part in and witnessed many battles yet he doesn’t include himself as a character in the book. He supplemented his direct knowledge with interviews and research he conducted after the war. In 1979, Mowat published his first-hand account And No Birds Sang on his experiences in the Italian campaign.

I was curious to read a war book written by Farley Mowat. Mowat wasn’t a published writer before the war began, but he clearly already had a writer’s eye for detail and irony. There are also various levels of meaning and commentary, largely to do with the psychology of the individual soldier and its influence on the cohesiveness and functioning of the group (the regiment).

Mowat describes the education – both in training and wartime realities – of these boys, most of whom lacked any formal training before the war. The buck hunters became master snipers; those inured to pitching hay became the men who carried cannons through mud and wet where no vehicle could pass. And with ties to home waning year after year,  the men gradually congealed into a powerful Regiment that won many outmatched battles.

The audacity of both the military brass and the individual members is hard to fathom and appears to be the reason the Allies did so well in many of the battles described. Part of that audacity came in the form of patrols. These were reconnaissance missions into enemy terrain, nearly always at night and often demanding utter silence despite extremely challenging terrain – mountains, rivers and mines.

The patrols often brought home uneasy knowledge: the Allies frequently outgunned and outmanned. But they had other strengths: surprise and audacity being two. Often the bluster was a substitute for power, as the enemy perceived them to be a greater threat than they really were.

Mowat describes one episode in which the soldiers are described as mountain goats for the feat they achieved climbing a steep mountain at night, carrying their equipment, in almost perfect silence.

“The going was foul; through a maze of sheer-sided gullys, knife-edge ridges and boulder-strewn water courses. There was the constant expectation of discovery … Absolute silence was each man’s hope of survival – but silence on that nightmare march was almost impossible to maintain.”

“First light was just an hour away. Under the soldiers’ hands were the cliff rocks towering a thousand feet into the dark skies. Each man who made that climb performed his own private miracle. From ledge to ledge the dark figures made their way, hauling each other up, passing along their weapons and ammunition from hand to hand. A signaller made that climb with a heavy wireless set strapped to his back – a thing that in daylight was seen to be impossible. Yet no man slipped, no man dropped so much as a clip of ammunition. It was just as well, for any sound by one would have been fatal to all.”

Mowat often describes deaths in terms of numbers of casualties, but occasionally the author details the last moments of a particular man or men. These sections paint a vivid and gruesome picture. They provide a foundation for reflection on the sacrifice so many made.

The Regiment is available through local public libraries via Interlibrary loan.