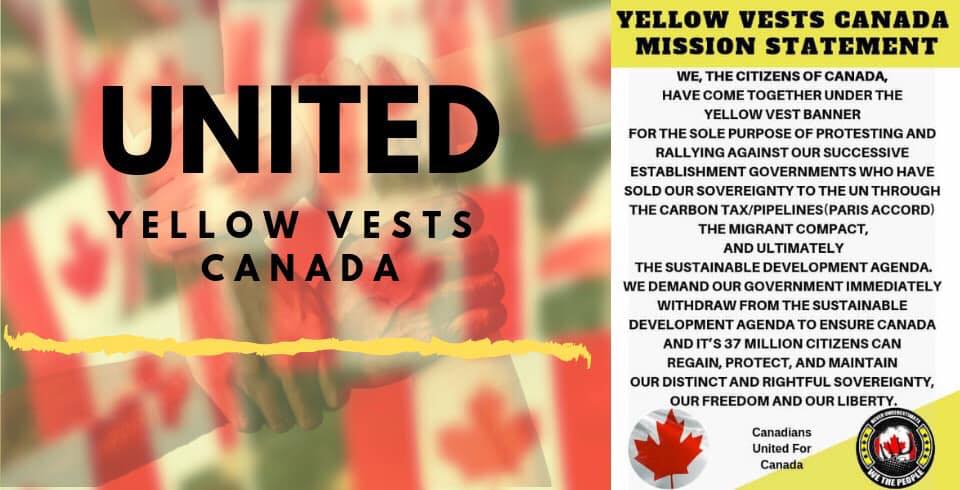 There have been three Yellow Vest protests in Valemount, the first on December 22, another on January 5, and the last one on January 12.

While popular online, only two protestors showed up to hold placards during the demonstrations.

Local organizer Richard Korejwo held a sign saying ‘No UN Migration’ in one hand and a Canadian flag in the other. Another protestor held a sign reading ‘Tru-dough must go.’

A common theme in protests across the country have been dissatisfaction with Prime Minister Justin Trudeau, though a statement issued in support of the Yellow Vest movement went further, accusing successive establishment governments of selling out Canadian sovereignty.

“We, the citizens of Canada, have come together under the yellow vest banner for the sole purpose of protesting and rallying against our successive establishment governments who have sold our sovereignty to the UN through the carbon tax/ pipelines (Paris Accord), the migrant compact, and ultimately the sustainable development agenda, we demand that our government immediately withdraw from the sustainable development agenda to ensure Canada and its 37 million citizens can regain, protect and maintain our distinct and rightful sovereignty, our freedom and liberty.”

The mission statement was authored “Canadians For A United Canada,” which is a registered nonprofit corporation based in Ontario. The graphic was posted to the Facebook group by Korejwo.

The leaderless movement appears to be a catchall for people with a grievance against the federal government. Some are demonstrating in support of pipelines, others are protesting immigration.

For local organizer Richard Korejwo, the main thrust appears to be the threat posed by Sharia Law, but it’s not a clear line from other Yellow Vest movements.

In a post announcing the January 5 protest Korejwo posted this:

“Now is the time to stand up to Sharia Law….Please bring all your friends or Canada will be over run,” he wrote. “This is not about religion it is about law and safety of all,” he said.

Korie Marshall, a former editor of the Goat newspaper, has raised some concerns about the local Yellow Vest movement online.

She said that the Yellow Vests are lumping issues together in an unhelpful way.

“They are not being clear about what their issues are, what they have concerns with or what they want done,” she said. “I might agree with some of it, but I think a lot of it is irrational and I don’t agree with it.”

Marshall said some of the discourse is fear-based and unproductive.

What she agrees that the carbon tax will hit middle class and lower income people the hardest. The Canadian carbon tax is designed to be revenue-neutral, however, according to recent news reports. BC has had a carbon tax since 2008.

Marshall said her biggest concern is that Canadians don’t destroy each other while they figure out the problem.

“I don’t want what is happening in Paris to happen here,” she said. “Either the riots or the taxes.”

Another resident, Bill Tarkanen criticized the protests for being off-base and serving a conservative agenda.

“As far as I’m concerned they should be wearing conservative blue vests as they blame everything on Trudeau. The pipeline not being built – even though he is trying his best to get it built,” said Tarkanen.

“Many of them seem anti-immigrant and some are definitely racist.”

He said concerns about Sharia Law are based on fake news perpetrated by social media.

Tarkanen said that at its heart, Canada faces a demographic challenge as the baby boomers start to retire.

“Boomers have driven the economy since the 1970s. I do understand why some people are angry as every year our currency is devalued we as a people need more money to buy the things we need to survive,” he said.

Tarkanen believes the protestors are misdirected, pointing out that Alberta’s NDP leader Rachel Notley could make a difference by building refineries and by getting oil to new markets.

“In France the yellow vests are about the 1% taking all the money. It’s about not having enough money to pay the bills from rising costs like taxes and fuel prices,” he said. “Here it’s a mess of many things, but mostly it’s about voting conservative not liberal.”