Kirby Scheller is a fan of the bike park.

“It changed my life,” he said. “We used to play video games quite a bit, now when we are bored we just pedal up, catch the shuttle and go biking.”

He and his brother Aubrey have grown up riding dirt bikes and being outside but getting to the bike park is something they can do on their own.

The brothers are are among a handful of regular volunteers that attend work bees to both build new trails and fix old ones.

Last week, Aaron Ermantrout, who owns and operates Peak Shuttles, decided to recognize the boys for their work at the bike park (along with several adults too).

He bought the boys burgers and fries at the local food truck.

“There’s no doubt in my mind that these two are some of the most well behaved, kind, and outgoing boys I have met,” said Ermantrout. “Whether it’s giving trail recommendations, helping throw dirt, or maybe pushing their mom’s buttons to get another lap in, you are almost guaranteed to find these two up at the bike park daily.”

Both Kirby and his older brother have been hurt at the park. In fact, Kirby had a close call while he was building a new unnamed access trail to Stumptown. He was stung by a wasp and went into anaphylactic shock.

“I was getting confused. I couldn’t remember a single thing, I was stumbling and felt like I was going to throw up,” he said. His throat started to swell up and it became hard to breathe.

His brother and some adults were nearby and quickly got him to the clinic, but now he carries an epipen, benadryl and gravol with him.

But this and other accidents have not dulled his enthusiasm for riding. He was elated to learn that a brand new advanced trail was named Stinger after this year’s epic wasp season.

Aubrey points out that Kirby wasn’t working on Stinger when he was stung… but that really didn’t seem to matter for Kirby. 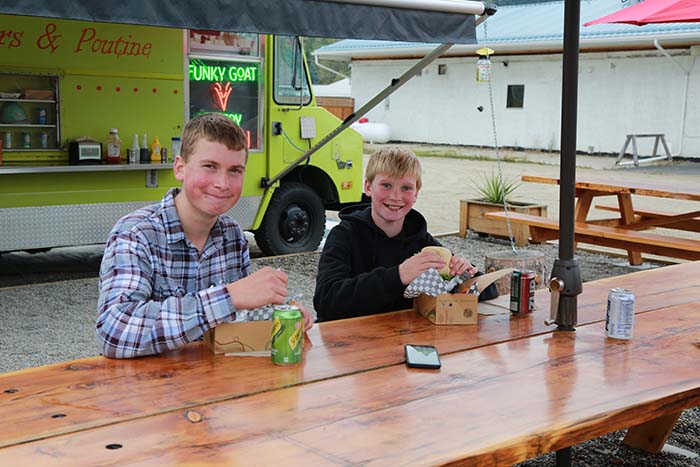