The Tiny House Warriors held a music concert at Mount Robson Provincial Park on Thursday, August 16. The concert and barbeque got underway around 5pm and roughly 60 people were in attendance, though the parking lot and nearby cafe had many visitors.

The Tiny House Warriors are indigenous activists trying to stop the Trans Mountain pipeline by building tiny homes in its path. They are asserting Secwepemc rights to the land, despite the fact that the local Secwepemc first nation supports the project.

Simpcw Chief Shelly Loring said the Tiny House Warriors have not followed protocol or asked for permission to protest in Simpcw Territory.

Regardless, the Tiny House Warriors have been active in the region since mid-July and organizer Kanahus Manuel was briefly arrested for failing to leave a provincial park in Clearwater.

The concert began with an address by Mike Arnouse, introduced as Uncle Mike by Kanahus Manuel. Arnouse addressed the crowd in a reflective, respectful tone.

Arnouse asked those gathered to reflect on the beauty around them and give thanks to Mother Earth for it.

Arnouse said the wildfires and smoke are ultimately caused by people.

“It’s a humbling thing to know that we’re not so brilliant destroying all this stuff,” he said.

“I’m not trying to cause any animosity or anything like that. If you want to argue with me, I’ll be sitting here and we can talk about these things peacefully.”

Arnouse said the best way to bridge the divide between people is to learn about each other.

“If you don’t know the way of life of another race of people, it breeds some things… one of them is racism,” said Arnouse. “It’s best to find out about each other and share those things to make things better.”

Arnouse asked people to consider the Secwepemc land where they sat, while he addressed people in the traditional language of the Shuswap people

“Politics and things get in between us sometime,” he said. “[It] causes us to argue instead of looking to work out the issues.”

“When you look at the things that I am saying, it sounds like save the animals, save the fish and stuff like that, but in the end it means saving ourselves too,” said Arnouse. 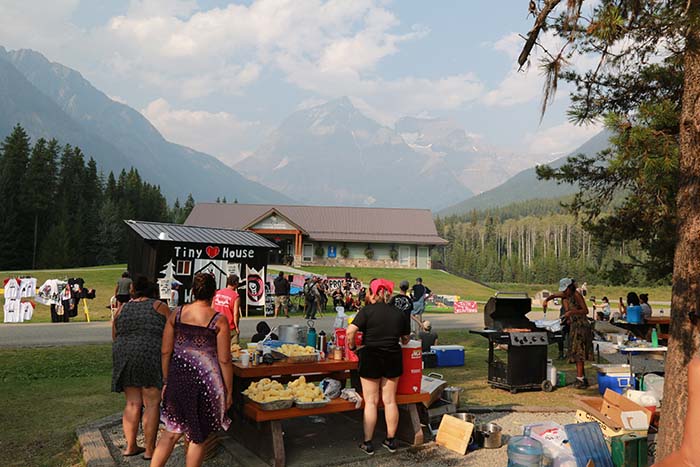 BC Parks staff scrambled to keep access to the Visitor Centre open during the event.

“BC Parks was not contacted by organizers about plans to use the Park for a special event, but efforts were made to accommodate the proposed event without impacting other park users,” according to spokesperson David Karn of the Ministry of the Environment.

Karn said the park offered the visitor centre parking lot for use, but made clear that they had to leave the site following the event.

“BC Parks has a legal responsibility for the park and ensuring public safety,” said Karn. He also said that the province recognizes the right to engage in peaceful protest and lawful assembly.

Karn said the protestors complied with the request to leave the park after the concert.