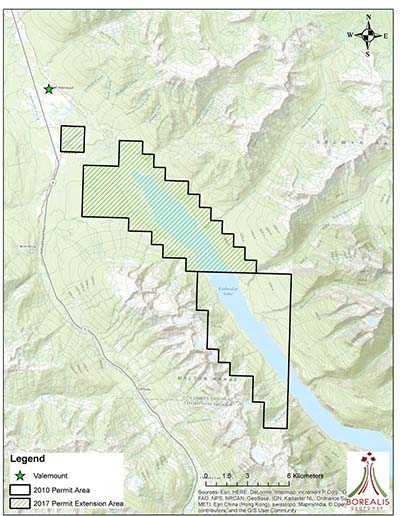 On Dec. 6th, the BC Ministry of Energy granted a permit extension to Borealis GeoPower.

The company has held permits along Canoe Reach south of Valemount since 2010 and has been working towards a drill program for a geothermal energy plant.

The next step for the Calgary-based company is to seek authorizations from the Oil and Gas Commission to start drilling.

“As MLA Bond said, there is raging agreement over this project,” said Alison Thompson, the CEO of Borealis GeoPower. “We’re hoping all the politicians can pick themselves up and actually get behind something.”

Thompson said the process going forward should be simple.

“We’re putting in our core hole program 5 to 8 all with the same design. Looking for that to go quickly,” she said.

“What this project is still missing is a provincial champion,” said Alison Thompson, CEO of Borealis GeoPower.

She said whether it is the Minister responsible for climate change, jobs, CBT, or indigenous affairs, Thompson said no one from the Province is championing the project, including Energy Minister Michelle Mungall.

“We’re in the newspaper a lot, but there is never any comment from the provincial government. There needs to be one person who provides the sound bite and takes the credit,” she said.

She said the project plays to all the ministries.

“The amount of propane that could be displaced is 12 megatons of carbon emissions,” she said. “The amount of power we generate will be dwarfed by the number of jobs we create.”

The next steps are getting road access permits and timber cutting permits (they are working with the Valemount Community Forest and timber will go to them).

Thompson said that the company would take ‘extra special care’ with the hole drilled at the Griffin Sawmill so that it could be reamed out and cased to create an artificial hot spring.

Thompson wouldn’t give a timeline for drilling.

“Only the Ministry will be able to determine our expected drill date,” she said.