For 15 winters, Rudi Thoni has been grooming 5 Mile Road; it’s become a popular destination for local ski tourers – including beginners.

Rudi Thoni found the glade that runs from halfway up 5 Mile Road to the staging area of the Valemount Bike Park.

On November 18 two fallers and about 20 volunteers gathered to remove fallen logs, brush and debris from the run.

For 15 winters, Rudi has been grooming 5 Mile Road and it’s become a popular weekend and after-work destination for local ski tourers. His wife Patricia, another avid ski tourer, estimates Rudi has groomed it more than 90% of the time. He uses their family snowmobile to do it.

Ski tourers use skis with articulated bindings and sticky skins on their skis to get traction going up snowy slopes. It allows them to hike up steep snow covered slopes. At the top, they remove the skins, adjust their bindings and then ski down. 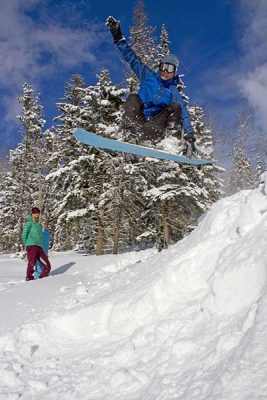 Rudi said the growth in the sport is staggering. When he first came to Canada only two types of backcountry skis were available; now there are hundreds.

Despite its growth in popularity, it is still difficult for a novice to start. Participants must learn how to ski a range of snow types, use their gear and know about avalanche terrain and companion rescue.

“It is a very dangerous sport,” said Rudi. “It is okay to be a novice, but even though you are a novice you are responsible to get the other guy out.”

Rudi is an owner of the Caribou Grill, its head chef and has served time as a heli-ski guide. Few others know the backcountry around Valemount like he does.

Rudi said 5 Mile is a great starting place because it is quick to get to, much safer in terms of avalanche risk, and a good place to make connections to go further.

“Basically it was just a place to go, especially at the beginning of the year when there isn’t much snow out there,” he said.

His grooming of the road makes the skiing down enjoyable.

“It is relatively low angle, so if you get six inches of fresh snow you aren’t turning anymore.

Once you groom it you can actually make turns,” he said.

Despite the proximity of the road to town, it has taken a while for ski touring to catch on locally.

“The first years there were very few people,” he said. “In the last five years there are more people ski touring.”

Now a typical Saturday could see 25 skiers use the slope, and lots of tobogganers take advantage of it too.

When John Crowley’s daughter Violet was young, Crowley would climb 5 Mile everyday after lunch and the rhythmic motion would put his daughter to sleep.

“It was perfect for a nap in the backpack,” said John. “Then a big ‘wheee’ skiing down.” Crowley also uses it to do nighttime training laps with a headlamp.

Despite being an accomplished skiier who routinely ventures far into the backcountry, Barb Janzen said recent improvements to 5 Mile have made an impact.

“I feel that all the development on the 5 mile hill are a feather in the cap for Valemount,” said Janzen.

Grooming 5 Mile does more than just provide a beginner ski touring slope; it also provides great winter access to an alpine hut and alpine skiing for people like Alan Lerchs.

“It only takes a couple hours for the road portion, maybe 3 with an overnight pack,” said Lerchs.

Lerchs routinely does the whole trip on skis.

One trip, with ‘absolutely bomber avalanche conditions’ he and his brother skied the east side of the ridge of McKirdy Meadows.

“It was probably the best run we’ve ever done in the Robson Valley,” he said.

Rudi is happy he has had a positive impact on the community.

“It’s nice to see people getting out instead of sitting at home doing nothing. In the new age of electronics, how long do you spend behind these little boxes?” he said.

“In Valemount it’s not like we have a big pool and gym, we have to use what we have.”

This season, all that’s needed now is snow.