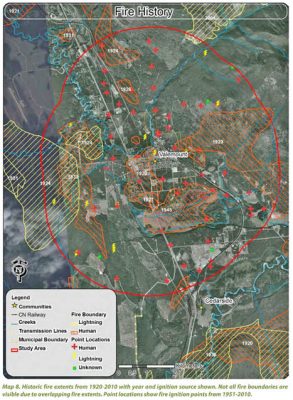 Valemount Community Forest Manager Craig Pryor hopes to help protect the community from wildfire by creating some new clear cuts around the community – including on private land.

Pryor believes that logging in some areas that are visible from the community could help prevent wildfires from ravaging the community.

“From what I have seen in my forestry career, continuous forest tends to burn more rapidly and in larger fire polygons,” said Pryor. “Fire breaks such as highways, rivers, large gullies, deciduous stands, cutblocks or agricultural fields, to name a few, tend to slow the fires down or stop them.”

Pryor said most of the land adjacent to the Village is private property, and apart from encouraging landowners to harvest, there isn’t much he can do.

“The VCF would target areas directly above the private property for harvesting. Unfortunately these areas for the most part fall under government Visual Quality Objectives which make harvesting and road building in these areas difficult,” he said.

A Wildfire Protection Plan from 2005 led to harvesting pine stands around Valemount which helped lower the fire hazard, Pryor said and the Valemount Community Forest will submit a grant application to complete a new fire preparedness plan.

“Once this plan is completed we will start to look at the forests directly above the Village to see if any harvesting is beneficial,” he said, acknowledging many other values, including domestic water systems, visual values, and proximity to private lands.

“We will have to act very cautiously in certain areas and try to balance all opinion,” he said.

Pryor said they would apply for the grant in the fall and complete it over the winter.

“We hope to have some areas identified and developed for harvest this coming spring & summer of 2018,” he said.

Fire Zone Protection Officer Ray Mikolash had just a few minutes to talk as he was headed out the door to finish demobilizing fire crews, mopping up and rehabbing after a fire near Vanderhoof.

Mikolash said it was difficult to comment without seeing the details of the plan, but looked forward to working with Pryor and other stakeholders.

He said the idea of a landscape firebreak seems like a good idea, but that it is more complex than a cat guard or a clear cut.

“When we look at strategic fuel management we’re looking at 2km,” said Mikolash. “And it depends on fuel. In some areas spotting distances are 5 km.”

He added there is value in “developing strategic fuel management” around town in areas of risk.

“I am looking forward to sitting down and developing a plan that makes sense.”