The newest conservation area in Valemount pays homage to a family with longstanding ties to the community.

On Jul. 18, Nature Conservancy of Canada (NCC) announced the creation of a new conservation area celebrating the memory of former resident and pioneer Anne Hicks.

“It was always what my brother George wanted to do. His only child died, and he wanted to make sure the land got left to conservation,” says Roger Hicks, one of Anne and George’s four children.

“My mother would be honoured to have a conversation area named after her — she might not believe it. My father had a park up here named after him so we thought it would be good to name something after my mother, who worked as hard or harder,” he says.

The Anne Hicks Conservation Area is a 29-acre — or 12-hectare — property near Valemount. Located within the McLellan River watershed, the area is rich in riverside forest ecosystems that support the healthy populations of salmon and bull trout that pass through Swift Creek, according to the NCC. 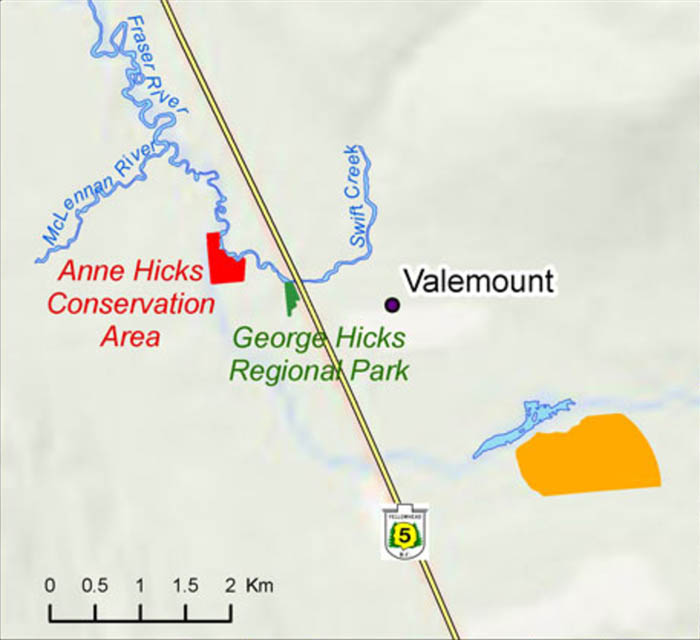 Swift Creek is a significant fish-bearing stream flowing into the Fraser River, and the forests of the Anne Hicks Conservation Area play an important role in conserving its vitality, according to the NCC. The stands of mature spruce and black cottonwood that line the creek are essential to its health; shade from the trees helps to regulate water temperatures for fish and the tree roots provide stability to the riverbanks, as well as microhabitats for spawning fish.

The NCC is currently preparing a management plan for the new conservation area, outlining actions to enhance and conserve the property’s important natural values, most notably the riverside forest and shrub habitat that provide important ecological niches for salmon, bull trout and other aquatic species, according to a press release.

Anne Hicks lived on the property until 1972. From there, the land was passed on to the children, until one son — also named George — approached the NCC to conserve the land for future generations by bequeathing it to the organization, according to the NCC.

“I think there were like 10 people here when they arrived. It was all brand new here back then — no roads, no railroads… We were the original hillbillies,” — Roger Hicks, one of Anne’s four children

The Anne Hicks Conservation Area becomes the second nature reserve in the Valemount area to honour the Hicks family. Nearby is George Hicks Regional Park, named for Anne’s husband, and the parks are just downstream from one another.

Anne Hicks was born in Beausejour, Manitoba, in 1917. She met George Hicks through the advertisements in the Star Weekly newspaper in Winnipeg and corresponded with him for two years before embarking west to the property near Valemount, BC. There, Anne and George became homesteaders and raised their four children — two girls, two boys — in a log cabin of their own making.

“I think there were like 10 people here when they arrived,” says Roger.

“It was all brand new here back then — no roads, no railroads… We were the original hillbillies,” he jokes.

The remote wilderness of the area didn’t dissuade the couple from starting a life; far from it, according to Roger, as George fell in love with the mountains and stayed.

Anne Hicks and her husband George were long-time residents of the Valemount area, establishing a homestead and raising four children in a log cabin of their own making, remnants of which remain in the forest. The family fostered a life in nature as they fished, mountain-climbed and worked to grow food to last through the winter. Both Anne and George were active community members, each serving as directors on the Yellowhead Highway Association.

The conservation of the Anne Hicks Conservation Area was made possible by a generous donation from the Hicks family, according to the NCC, as George Russell Hicks’ left the property to NCC through his estate.