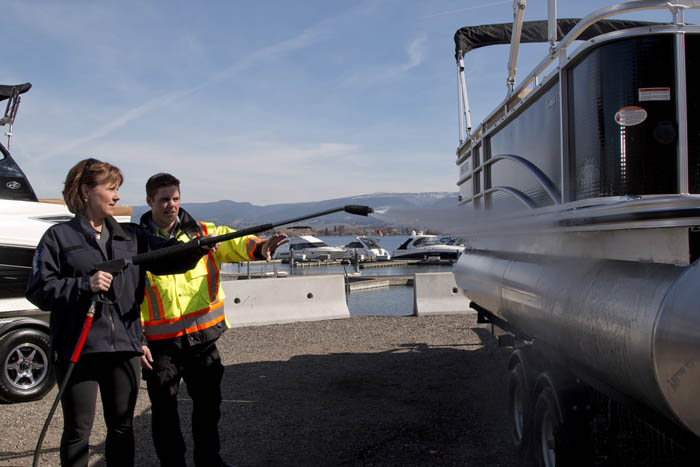 BC Premier Christy Clark pitches in, pressure-washing watercraft to dislodge any mollusc hitchhikers.

A roving station was set up in Valemount last year under the pilot program. Columbia Basin Trust helped increase the number of inspection stations from three to six last year, with four of them located throughout the basin (Cranbrook, Invermere and Nelson as well as Valemount).

This year, under the expanded program, five permanent stations will be set up along the BC-Alberta border (Dawson Creek, Valemount, Golden, Invermere and Cranbrook) with three more along the US-BC border (Lower Mainland, Penticton and Nelson). Six mobile decontamination units will also round out the fleet this year, and the permanent stations have the ability to become mobile if the need arises.

"Invasive mussels pose a significant risk to B.C.’s aquatic ecosystems and we need to take strong action to keep our waterways safe," said Shirley Bond, MLA for Prince George-Valemount in a news release.

The stations are expected to be operational starting April 1 for the 2016 boating season. With a total of 32 conservation officers staffing the stations, (an increase from the 12 last year), they will operate 10 hours a day, 7 days a week, from April to October.

The Invasive Mussel Defence pilot program was launched in 2015. During May-October 2015, the Province says over 4,300 boats were inspected. Seventy were identified as coming from an invasive mussel infested province or state. Of these 70 watercrafts, 34 required decontamination and 15 were confirmed to be transporting invasive mussels or their larvae. Six were issued a 30-day quarantine order due to risk of live mussels.

The additional funding this year is again with the help of Columbia Basin Trust as well as BC Hydro, FortisBC, and Columbia Power. The Province is contributing in kind with staff, equipment and office space.

"As with elsewhere in the province, lakes and rivers in the Columbia Basin region are an incredibly important asset, relied upon for everything from power generation to recreation and tourism to community water supply and irrigation," said Neil Muth, Columbia Basin Trust president and chief executive officer. "Keeping these waterways free from invasive mussels is essential and fits with our environmental goal of maintaining and enhancing the health of our aquatic ecosystems."

The Invasive Species Council of BC (ISCBC) applauds the government’s announcement, saying it has worked for more than six years to bring more partners together to prevent invasive mussels from infecting BC’s waters.

"There is a role for all of us who use our waters to make sure our equipment and boats are clean before going to other lakes or streams to keep BC free of invasive species, including zebra and quagga mussels," says Gail Wallin, Executive Director of the ISCBC.