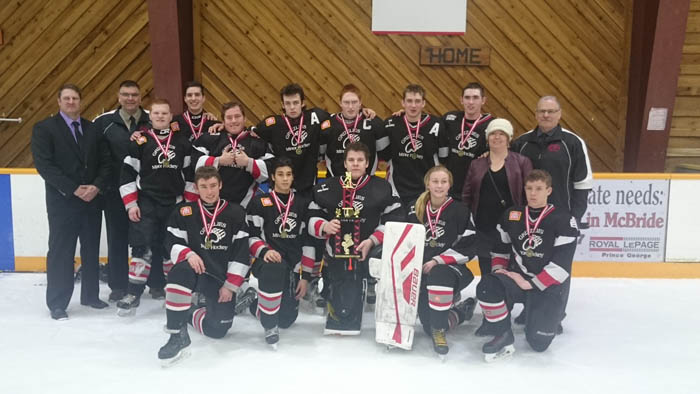 Game two for the Grizzlies was Saturday afternoon against the Kamloops Blazers. Both teams were aggressive and took numerous penalties. The score as 1-1 after the first period, with Vizza scoring on the power play assisted by Basran. At the end of the second the score was 2-2 with the second Grizzly goal coming from Vizza assisted by Shawara and Drader, again on the power play. Basran notched the third goal in the third period with Drader assisting. The insurance marker for the Grizzlies was scored with 2:51 seconds left in the third by Grizzlies center, Drader assisted by Basran giving the Grizzlies a 4-3 win.
Grizzly forward Ethan Quam’s (AP) played his last game of the tourney for family reasons and his fore-check would be missed.

The tie breaking formula was needed to determine the placing for 2nd, 3rd and 4th place as Kamloops, Terrace and the Mackenzie Knights had identical 2-1 records in round robin play. With the least goals against, the Terrace team was awarded second place. Mackenzie (3rd ) and Kamloops (4th) were pitted against each other for the 3rd place trophy. Mackenzie had beaten Kamloops in round robin play. The two Prince George teams played for 5 and 6th place. Play-off games started at 8 am on Sunday morning with the Prince George Steelworkers taking on the Prince George CNC team. PG CNC dominated and played to a 9-2 victory. The 3rd place game followed and was a very entertaining back and forth affair. The Kamloops Blazers were able to exact revenge from their round robin loss and defeated the Mackenzie Knights 5-3 to take the 3rd place trophy. The Mackenzie Knights were awarded the Most Sportsmanlike trophy for fewest penalties in the tournament.

The championship game was at 11:30 with the Grizzlies playing Terrace. In front of a large home town crowd, the Grizzlies started the game utilizing their speed and relentless fore-check. Terrace’s slower defenceman were unable to handle the pressure and the Grizzlies were able to score three goals in the first. Scoring for the Grizzlies were Janeke and Vizza (2). Assists went to Drader, Braaten and Austin Gibson. In the second period a Terrace player broke into the Grizzlies end on a break- away. Grizzly goalie Knezacek denied the shot with a five- hole save and seconds later, Jones scored for the Grizzlies making it 4-0. Referee, Barry Kennedy, stated after in his opinion this was the turning point in the game. The Grizzlies scored two more times in second making it 6-0. Scoring was Valemount product, Griffin and Vizza (3). Assists went to Basran, Drader and Shawara (2). It was more of the same in the third period with Terrace unable to reply or handle the outstanding fore-checking employed by the Grizzlies. Basran, Vizza and Jordan Gibson scored for the Grizzlies. Assists went to Vizza, Drader (2), Janeke and Austin Gibson. Knezacek played a strong game and was rewarded with his second shut-out in the 9-0 win. Grizzly coaches Brian Shawara, Gerry Porrier and Brady Knezacek were surprised at the final score and agreed the game was the best they had seen the team play all year. With the Grizzlies speed and fore-check, the bigger Terrace team were simply run into the ice and were exhausted.

The McBride Grizzlies would like to thank all the businesses who donated prizes and spectators who came out to watch some fast and entertaining hockey over the week-end. The Grizzly coaches would also like to thank their manager, Kristine Drader, for her tireless efforts over the week-end and throughout the year.