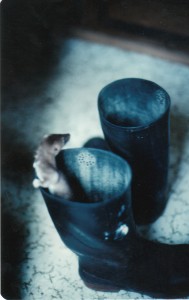 I was so happy to have my helpless little companion to raise, the orphan weasel I had rescued from the ravens. He was very small, vulnerable and delicate. I kept him in a small box with a sock for a blanket. At first he slept for 23 hours a day awakening only to eat. For a little baby he had a diversity of different sounds he would make to indicate what he needed – food, water etc. I recognized them all except for one. It turned out it was just for comfort and contact: he wanted to be held until he fell asleep. After three weeks his eyes opened and he began to awkwardly move around, climbing from his box, exploring his world. As he grew older, he naturally became more active and his energy level began to multiply almost on a daily basis. A weasel has constant non-stop energy; they run, crawl, climb and explore. They love to find a hole in the wall and crawl inside spending all day exhaustively exploring every square inch, as this is how they hunt.

At three months he transformed from a sleepy little angel into the most energized and furiously active explorer/acrobat you could ever imagine. As they are largely nocturnal, it would all begin about a half hour before dark. He would emerge from his secret lair in my trailer to put on a spectacular acrobatic display all at 200 kph, full speed ahead. Bouncing off the walls, forward and backward somersaults, back flips and laps around the kitchen. It would go on at top speed for an hour. Unfortunately for me, he was just warming up. He would explore every nook and cranny of the house all night long including the hole in my sleeping bag- more than once I awakened to his nails climbing up my leg in the middle of the night. He developed another disturbing habit, as a lot of his day was spent on my shoulder, he liked to lick my earlobe. At first that was OK, but after a while it went from harmless to frenzy and often ended with 4 tiny canines puncturing my lobe. I think that the taste of salt would trigger the blood taste and the kill mechanism. It hurt! I began to train him, a good clunk on the side of his head with a loud “NO” got him to eventually stop. For amusement, I would let him pull that on a few unsuspecting friends for a laugh. That’s part of the reason I don’t have too many friends…

To try to make a long and more detailed story short, I realized I had to prepare him for life in the forest and get him out of my house as he was too much to cope with. As young weasels are prey in the wild, I had to develop a step by step plan to release him which included live trapping mice for him. I would put a little grain in a pail in the barn, in the morning there were always mice in it that could not get out. I would bring the pail to the weasel and he immediately and instinctively knew what to do, one quick crunch at the base of the skull, he would then jump out of the 5 gallon pail carrying a mouse half his weight and scurry away to his favorite hiding spot to devour his meal. I began to leave a small hatch open so he could go and come. He began to leave for longer and longer periods of time. I bid him farewell as I locked up my cabin and headed north for the winter work season. To my great surprise and delight, the following April I heard the door slam on my live box trap and went out to find my buddy “Weasy.” He stayed around for a week as I fed him milk and hamburger. It always made me feel that I had done something right to see the little guy survive a winter. Didn’t see a mouse for a year. So don’t forget, feed your weasels (fresh meat only)!

About this column: The Eye of the Raven is a forum of interesting and unusual animal tales exploring the viewpoint of the four-legged and feathered members of our community. As a raven lives as long as a human and has incredible eyesight, the forum is based on observations that perhaps only a raven would see in the course of his life, encounters that we as humans are allowed to see only as the veil that hides the mysteries of nature is briefly parted. The forum is open to the accounts of anyone who can articulate an unusual or remarkable encounter with a wild animal under 500 words, subject to editor’s approval.