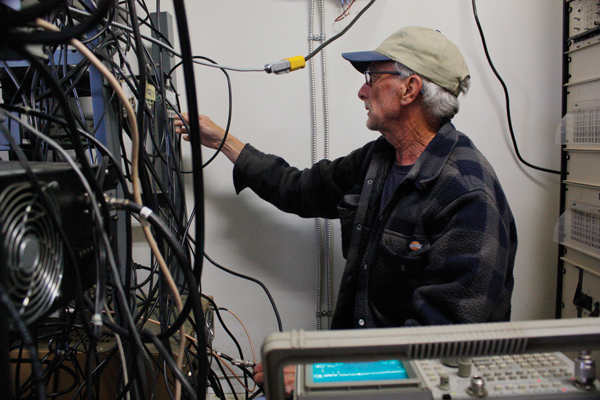 Bill Crawford is about to open the storage trailer up on Lucille Mountain, and he is a little nervous. It’s faded yellow, with a ramshackle set of stairs up to the sliding door. He unlocks it and then pounds.

“Watch out, you might see some beady eyes in there,” Crawford says. “Last time I’ve seen them they were about this long,” and he held his hands about two feet apart. He didn’t specify what animal he was talking about.

Crawford is the man who keeps the waves flowing into McBride’s radios and televisions. He’s a little stooped and he doesn’t talk much.

“Somebody asked me to give him a hand one day,” he said, explaining how he got into his line of work.

His work mainly happens in a small room full of expensive electronic boxes that look like VCRs. The technology is about 20 years old, but Crawford said it hasn’t changed much over that time. Several of the boxes have dials wagging, each of which shows how loudly one of McBride’s radio stations is broadcasting. There were switches labeled “Dir” and “Ref,” and Crawford demonstrated how they don’t work. Next to the switches were lines of numbers, like on gym locks where you flick them into the combination, which set what station the signals show up on—1-0-5-1 for 105.1, for example. There were two cabinets and a plywood desk, each of which were propped up with stray pieces of wood. There are black wires everywhere and it’s loud because of the fans that keep the equipment from overheating.

Outside there are two satellite dishes. They’re covered with blue tarps to keep off snow and ice, which makes them look like suburban swimming pools in the wintertime. And there are a couple of towers on which 14 transmitters perch.

That’s a lot for a small town. Valemount only has about a third as many. McBride has more public programming as a result. There are about a dozen channels you could pick up with rabbit ears, as well as CBC radio, pop music from Toronto, country from Edmonton, and rock from Vancouver. But that means there are more things that need fixing. Crawford comes to McBride relatively frequently, about six or seven times a year. This weekend, he was up on Lucille Mountain because the rock station was out.

There are several things that can go wrong. Overheating is the most common problem; the fans stop working so the electronics stop working. Alternately, when the fans are working work they can draw in dust—and pollen in the springtime—which mucks up the electronics and requires Crawford’s intervention. Power outages sometimes mean he has to do the equivalent of restarting the equipment, but without the benefit of a simple button to press. Sometimes lightning strikes, which is what happened this time.

“A little burst of electricity and it’s gone,” Crawford said.