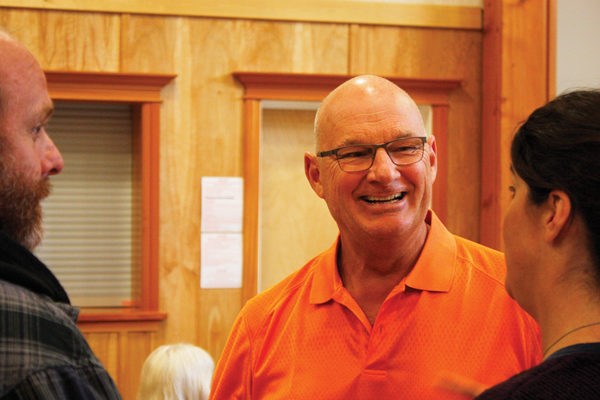 Pete Berndsen was wearing a bloodstained shirt when he applied to become a cop.

It was cow blood. Berndsen was tired of working for his family’s business, delivering massive cuts of beef. And when he walked into the local police station in Winnipeg, looking to change careers, he still had on his work clothes.

Berndsen, 61, lived to tell the tale, and went on to work for the Royal Canadian Mounted Police for nearly 40 years, including 14 in McBride, before retiring early this year.

He found himself looking longingly at photos of his cabin on his phone, and decided to call it quits. Even so, his role in the community hasn’t changed much—he’s still fielding a lot of phone calls that start with the words “I know you’re not a cop anymore, but…”

People had happy memories of Pete “The Heat” Berndsen at a retirement party earlier this month. He was the cop who mixed brutal handshakes with a rare sort of approachability. His nickname stems from an event early in his career. A local school hosted an event called “meet the heat” (aka the cops) and Pete showed up, and realized heat rhymed with Pete. He dubbed himself “Pete the Heat” to try to be more relatable to the kids. especially since Berndsen is difficult to spell and remember, he explained. Berndsen was relatable in other wasy too. He wore a pig mask on Halloween, and dressed up as Santa for Christmas. And he was the rare cop who had his number in the phone book.

He was known best for what he called “park, walk, and talk”— he made getting out of his cruiser and socializing with people a part of his job description.

And he said his philosophy of police work was simple: “Work extremely hard to keep people out of jail.”