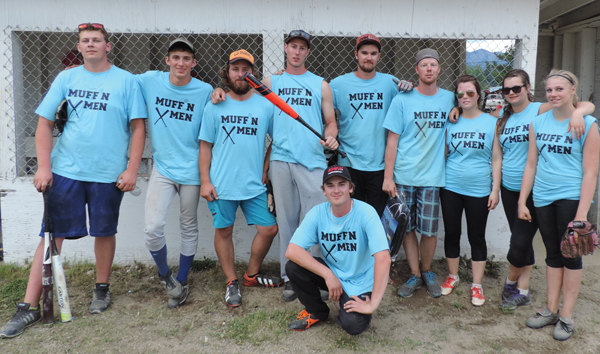 On July 18th, a slo-pitch tournament was held in Valemount’s main ball diamond as a fundraiser for Joni Plummer. On June 14th, Joni was playing in a Memorial Slo-Pitch tournament in Fort McMurray AB, when she was hit in the mouth from a bouncing line drive. Joni received extensive damage to her upper jaw as well as her upper and lower teeth. The cost for repairing her teeth is going to be more costly than the initial estimates that she received.

This fundraiser made up of four local teams was able to raise approximately $2,400 in one day. The first place team Muff n’ Men received a new bat and equipment bag as well as bragging rights. Second place went to Nice Snatch. This was a $100 prize which the team donated back to the event. I’d Hit That and Here 4 Beer were the remaining teams in the tournament. The lucky winner of 5-9 hole golf passes from Pines Golf Course was Samantha Piper. The day concluded with a dance at the Curling Rink, with DJ Wellesley Black also donating his services.

Although a slo-pitch tournament needs players to make it happen, the organizers also have businesses to thank as well. A huge thank you goes out to all the local businesses and non-profits who pitched in.