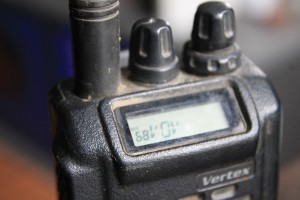 The maps for the forest service and resource roads for Prince George and Robson Valley areas aren’t finalized yet, but Brian Chow, Chief Engineer with FLNRO says it’s not the maps that are important for the new standardized system of radio communication on the province’s resource roads – it’s the channels that matter.

The ministry is in the process of rolling out a new standard set of radio protocols for resource roads in the province to improve safety for road users. It will take effect for the Robson Valley area on June 1st, 2015.

“This is a simplification,” says Chow. He says every user will have the standard bank of 40 channels (35 resource and 5 loading) and no matter which road they use, they will see the sign indicating the proper RR Channel for that road. “The frequency doesn’t matter.”

Changes include new standardized road signs, radio call protocols and a bank of standardized mobile radio channels. The new protocol will impact forest service roads and other roads that require permits. People who use radios on these roads will be required to have the new channels programmed into their mobile radios before the transition dates for their areas. But Chow stresses that not all users of the roads have radios. Many resource roads are also used by the public to access recreational sites like hiking trails, fishing and camping sites.

Forest industry workers and other road users using mobile radios must have their radios reprogrammed to incorporate the new resource road channels, says a news release from the ministry. And they recommend the programming be done by certified radio technicians.

Leslie Woodley from Central Interior Communications in Prince George says they’ve already had a number of clients come in to have their radios programmed with the new bank of channels. She highly recommends it be done professionally because the bands are narrow, and there is a high potential to program them incorrectly. Also it is illegal according to Industry Canada to program your radio yourself. She says the programming process varies depending on the radio. Some newer radios are capable of handling up to three separate banks of channels, so the new bank can be programmed without affecting your existing channels. For other radios the process may be more complex, and some older radios may require replacement. Central Interior Communications charges on an hourly basis ($90 per hour) and many radios can be done in about half an hour, but it really depends on the radio, says Woodley.

“Some of the older radios will not be able to handle the channels as they are not capable of Narrow Band Channel spacing,” says Wendy Ackeral of CPHP Communications, also in Prince George. She says they are able to handle many brands of radios but not all, and you can call with your make and model beforehand to check. She says a complete reprogram could take up to an hour, depending on the radio, and they are encouraging customers to get it done early
by offering deals that expire on June 1st.

Ackeral recommends that everyone using the back roads, whether you are a trucker or someone just going camping, get the new channels in their radio. “The roads are radio assisted, so with everyone having the channels, they will know where other trucks are on the road. That’s a great safety measure.”

The ministry advises mobile radio users to retain current radio channels and frequencies until they are no longer required.

The ministry says new signs will be posted on local resource roads indicate which radio channel to use and the calling interval, with drivers required to indicate their direction of travel and their vehicle type. Drivers using mobile radios must call according to the posted channels and call protocols. Chow also stresses it is important to remember that forest service roads are “radio-assisted,” not “radio-controlled.” All users should drive safely according to road and weather conditions, and be aware of the potential of other vehicles on the road.

The changes are rolling out across the province over the next year or so. The Prince George District including the Robson Valley and other districts in the southern and northern interior will begin using the new resource road radio channels on June 1. Quesnel, Thompson Rivers, Cascades and Okanagan Shuswap natural resource districts will convert to the new protocols and resource road radio channels beginning May 4, 2015. Some districts on the coast and in the Cariboo transitioned last August as part of the pilot project, or are in the process of transitioning.