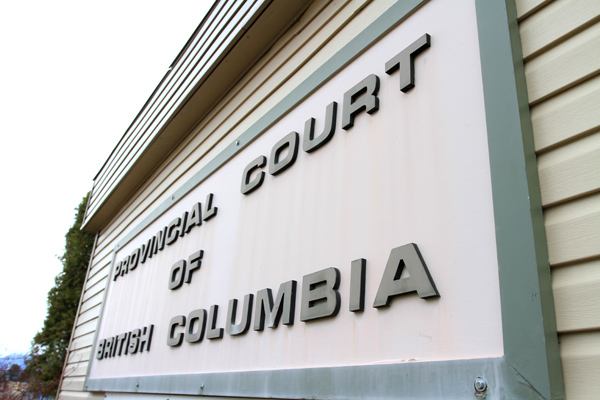 The law came to McBride last Friday, and the parking lot was packed. There were defendants and lawyers, a crowd of mounties and a judge. And there were also a number of spectators, some of whom had no direct connection to the proceedings. They came for the show.

At least some of the defendants didn’t want them there.

“I don’t think it’s very fair,” said one defendant. “Do you want everyone knowing what you did your entire life?”

“People around town are going to look at me and they’re going to know,” the person added. “It’s uncomfortable.”

“It gives them something to gossip about,” said another defendant, who said he didn’t want his name used because he didn’t want people to hate him. “And then they won’t even get the story right.”

Charges on the docket that day included assault, speeding, cheque fraud and family court matters.
The retort goes that if the defendants didn’t want the gossip, they shouldn’t have broken the law in the first place.

“How private is it gonna be if you get in trouble and go to court?” asked Dave Barnett, who stopped by the proceedings to see a friend.

The right to watch a trial, any trial, is also a cornerstone of the Canadian legal system, explained Andrew Pirie, a law professor at the University of Victoria. It’s called the open court principle.

The basic idea is that courts might do bad things if they’re allowed to operate in private. And even if they didn’t, people wouldn’t have faith in something they couldn’t see.

“Without publicity we can’t have justice,” he said.

And if the price is the unveiling of someone’s private life?

“Most of it isn’t too shocking, really,” said defense lawyer Shawn Buckley who spoke after court last week as his client looked on, head bowed.

There are rare exceptions to the open court principle. A court can prohibit the publication of the name of someone involved in a trial, which can happen when kids are involved, or to protect the identity of a rape survivor, for example. And the public can be banned from a courtroom to ensure the safety of an informant.

But in a small town, privacy may be a moot point. Things get around regardless, a defendant said.

“If you want your gossip just go to The Beanery and listen to ’em talk.”