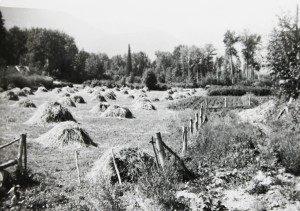 The McBride Farmers Institute was incorporated on March 17th, 1915, making it likely the oldest still-active association in the valley. Still addressing issues of concern in the valley today, the Institute will celebrate 100 years in a few ways over the coming months, including hosting the District C Convention on May 30th.

The Institute was started at a time when there wasn’t much for government services of any sort in the area. Sheilagh Foster has written out a brief history of the Institute, to go along with an application for a Centenary Farm Award. Gathered from original sources, Foster’s own transcription of CBC interviews with an original member of the institute and the historical research published in The Robson Valley Story of Marilyn Wheeler, the history shows how important the institute has been to the community.

History of the Institute

The certificate of incorporation shows the Institute was to operate not in a specific county, district or municipality, but “The Valley of the south fork of the Fraser River, from Urling to Tete Jaune Cache.” (Urling is a railway point northwest of McBride, near the Morkill River.)The head office would be in the recently re-named community of McBride, BC.

Filed with the Minister of Finance and Agriculture at the time, under the provincial Agricultural Associations Act of 1914, (both the act and the ministry have since changed names) the incorporation required a minimum or 25 people – they had 26. President Lester Blouin says the membership fluctuates over the years, but there are currently about 30 members.

Marilyn Wheeler’s book The Robson Valley Story says the Institute lobbied in its early years for a road to connect the community with Kamloops and Prince George, as well as schools, trails for outfitters and hunters, and tourism as well as farming needs. The Institute even passed a resolution in 1938 threatening to form a new province of Northern British Columbia, “it being believed that the North Country is being bled to supply funds for use in the south,” if a concerted effort was not made to complete even a farm wagon road to Prince George. In 1962 they were still petitioning the Ministry of Highways to keep Highways 16 and 5 open all winter.

Roads are still a concern in the valley, but it is a different type of road that concerns the Institute now – forestry roads. Blouin says forestry companies tend to want to close down the roads if they are not actively using them.

“But if they do that we won’t have any tourism,” says Blouin. Forestry roads throughout the province, especially in the north, are often the only feasible access to recreation sites and trails, which many communities are building their economies on.

“It affects a lot of people, not just tourism. There are farmers that have range land up there, guide outfitters, trappers, forest fire access, search and rescue… They are pretty important, those roads,” says Blouin. The Institute continues to present resolutions to District C, and then to the government about these issues.

The Institute is hoping to host the conference at the Elks Hall, to represent old times, but if that doesn’t work out they’ll host it at the new Community Hall, says Blouin. They are planning for about 100 people, including a couple dozen from the Prince George area, and they are hoping to have Judith Gulchon, Lieutenant Governor of BC back. Gluchon spoke at the Institute’s annual banquet in December 2012, shortly after her appointment in October of that year. At the time, she told the group one of her goals for her tenure was to learn as much as possible about agriculture in the province and to see it firsthand.

“Mind you, I may wait for spring before I venture out to regions north of Kamloops again!” she said in her speech.
Blouin says they also hope MLA Shirley Bond can make it to the convention, as it is a big day for the Institute and the community. He says they’ll also be celebrating the centennial during Pioneer Days in June and at events throughout the summer.