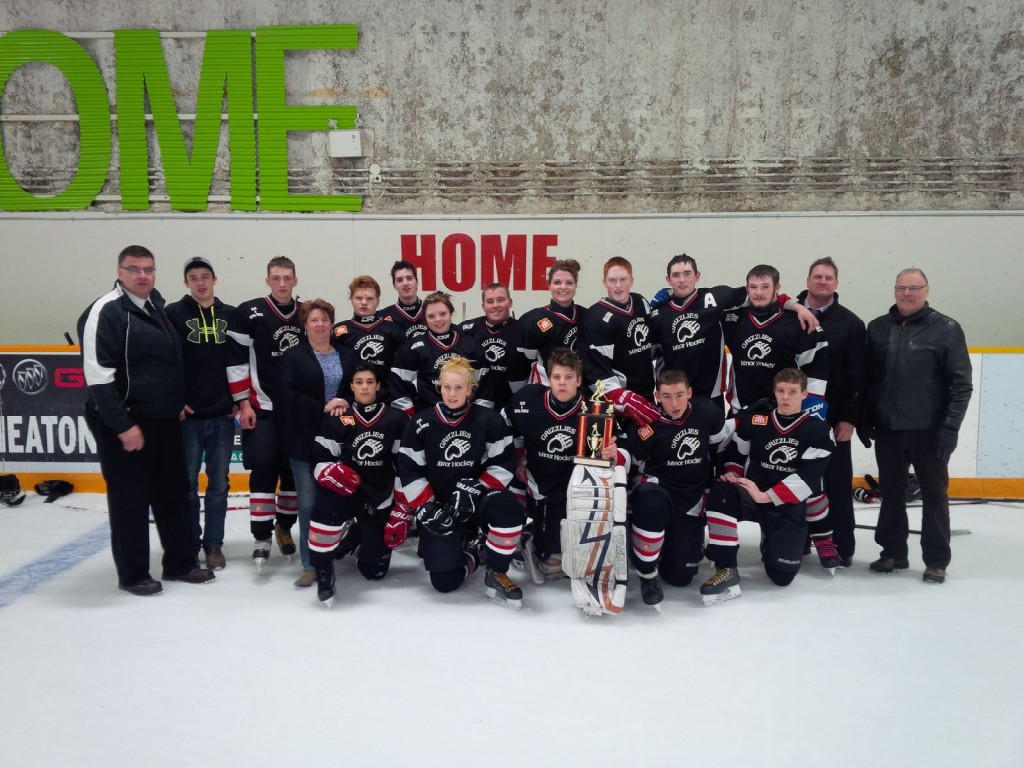 The McBride Grizzlies Midget Hockey team battled through some adversity two weekends ago to reach the final at a 5-team tournament in Mackenzie, BC. The Grizzlies had not played a game in almost 9 weeks, had a rash of injuries, were fighting the cold/flu bug and it showed when they lost to the Williams Lake Lussier select team 3-1 in the first game. Grizzlies forward, Shaelyn Braaten had a goal called back because the net was dislodged which would have tied the game at 2-2.

In game two against the Smithers Castle Midgets, the Grizzlies remained in hibernation until the third period when they began to get their skating legs and attempted a come from behind effort. The Grizzlies fell short losing 7-6. Rylan Moore, Valemount products Darion Griffin and Hunter Friesen along with Austin Gibson all tallied goals for the Grizzlies. Bryden Basran notched a pair of goals in the loss. Dylan and Julie Vizza both had two assists each with Billie Littlechild, Friesen, Griffin and Keith Shawara adding assists.

In the third and must win game on Saturday, the Grizzlies took on the Mackenzie Victory Bantam team. The Grizzlies started slow but eventually had a strong effort winning 13-3. Dawson Drader notched a hat-trick with Dylan Vizza and Shawara each potting 2 goals apiece. Moore, Basran, Griffin, Julie Vizza, Brett Jones and Noah Janecke also scored goals. Shawara and Griffin pitched in with 2 assists each. Single assists came from Moore, Jones and Dylan Vizza. Grizzlies goaltender Robert Knezacek had a bounce back game.

Sunday morning saw the Grizzlies play their fourth game of the tourney and another must win if they had any chance to reach the final. The Mackenzie Midget Knights were the opponents who were hoping to reach the final with a win in their home tournament. In a rare occurrence, which still mystifies coaches Gerry Porrier, Brian Shawara and Brady Knezacek, the Grizzlies came out flying in the early morning game and despite the time change. Both teams traded chances and there was no score after the first period. In the second, Griffin scored for the Grizzlies with Jones and Drader assisting. With a 1-0 lead going into the third, the Grizzlies exploded for 5 goals with Basran, Shawara, Moore, Friesen and Jones scoring. Jones also notched 2 assists with assists coming from Drader, Basran, Janecke, Austin Gibson and Littlechild. Grizzlies goaltender, Knezacek, had his strongest game of the tourney thus far bagging the shut-out. With 3 teams tied with a 2 win and 2 loss record, the Grizzlies were able to reach the final on the goals for and against differential. This meant a re-match with the Williams Lake Lussier select team which went undefeated.

In a very exciting final the Grizzlies scored the first goal of the game in the second period by Dylan Vizza assisted by Shawara. With just 28 seconds to go in the second period , Williams Lake scored to tie the game. Williams Lake took the lead in the third period with the Grizzlies replying on a goal from Julie Vizza assisted by Shawara. Grizzlies forward, Jordan Gibson, paid the price for being a pest in-front of the net when he was hit and suffered a blow to the head. Gibson was sidelined for the rest of the game. Both teams traded goals with Shawara scoring, assisted by Basran, for the Grizzlies.

With just 55 seconds to go, Williams Lake scored to take a 4-3 lead. Then with the Grizzlies net empty for the extra attacker, Grizzlies center Shawara continued his outstanding play and notched the tying goal with just 1.6 seconds left in the game forcing overtime. A five minute sudden-death overtime period solved nothing and for the second time this year the Grizzlies were in a shoot-out for a Championship game. Both sides traded chances with no goals being scored until the seventh round when a Williams Lake player was able to score the winning goal. Despite the disappointing loss the Grizzly coaches were once again impressed with the player’s efforts on and off the ice. The Grizzlies were complimented by the refereeing officials for their play being “first class”.