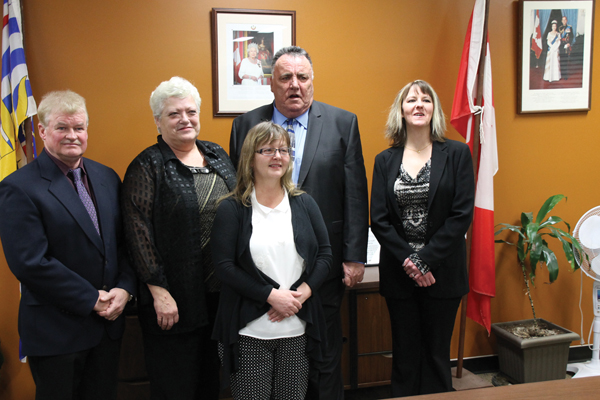 Loranne Martin, Mayor of McBride, says Council does not have a problem with Village employees unionizing, that is their right, but they question the choice of the Christian Labour Association of Canada (CLAC). She says John Aitken’s termination is a matter of dispute between the Village and the CLAC, who are requesting that he be reinstated.

On Monday, Martin provided the Goat with a copy of a letter signed by all of Council and the CAO that was sent out to employees of the Village regarding the CLAC certification drive and coming vote.
“There has been so much misinformation so we wanted staff to know where we stood,” says Martin.
“Employees have the right to unionize. I am a shop steward; I know that,” says Martin. “Council has never been opposed. We will not stand in their way. Their jobs are not in jeopardy, and their job security has never been an issue.”

She says Council’s only role will be to deal with the implications for the Village’s budget should unionization occur.

A hearing was held at the BC Labour Relations Board on Tuesday, Feb. 3rd on the certification of the union and a submission of unfair labour practice filed by the CLAC.

A news release from the CLAC after the hearing says the parties have agreed that Aitken will remain on the Village payroll until at least March 13th 2015, pending a decision of the Labour Relations Board. Aitken and the CLAC allege that Aitken, who was the working foreman for the Village, was fired by Mayor Martin during a phone call on Jan. 24th, after attending a CLAC information meeting the night before. Sections 5 and 6 of the BC Labour Code prohibit an employer from discharging, suspending, transferring, or otherwise disciplining employees because they seek to unionize.

“I’m happy with the decision,” said Aitken in the CLAC news release. “It’s been a stressful time for me and my family, but I’m thankful for CLAC’s support, and it’s clear, now more than ever, that the employees of McBride need a union.”

“We are in processes right now, and there is not a whole lot else we can say at this time,” Martin told the Goat on Monday, regarding the situation with Aitken.

In tandem with the unfair labour practice hearing was a hearing on the creation of a union for Village of McBride employees, which includes employees of the McBride Community Forest, a solely-owned subsidiary of the Village.

On the application for certification last week, Vice-Chair Jacquie de Aguayo ruled that CLAC had the requisite support and ordered a vote; all eligible employees of the Village of McBride and the McBride Community Forest Corporation will vote by mail-in ballot, CLAC reports. de Aguayo ruled the ballots are to be returned no later than Feb. 27th and the ballot box sealed pending the board’s decision on the unfair labour practice and the challenges to the composition of the bargaining unit.

Ryan Bruce, spokesperson for the CLAC, said some of the issues to be dealt with at the next hearing will be around who is eligible to vote, so the votes will be double sealed until after the Labour Board makes its decision. Bruce expects 10 people to vote, but he says the Village is claiming Aitken is a manager, not an employee, and so would not be entitled to vote. He says it is the CLAC’s position that Aitken is an employee.

“It’s nicer to have bigger bargaining units,” says Bruce, “but if they determine it’s not a common employer and the vote is successful we will represent two people as a stand-alone bargaining unit.”
In an interview with the Goat last week, Aitken said he still has not received written notice of his termination.

Aitken said he and other Village staff met with CLAC to discuss forming a union because they were worried about job security with the new mayor and council.

He said things that made him fear for his job were the Village changing locks on Village buildings without alerting or including him.

“Things like this, being the Public Works foreman, goes through me,” he said. “I would have issued a PO for it, or put it out for tender.”

Mayor Martin told the Goat that as of Tuesday morning, no locks had been changed, but a security issue was discovered after Aitken says he was fired.

Aitken had worked for the Village for nearly three years, all as the head of Public Works. He was hired under the previous Mayor and Council.

Aitken said the biggest thing he wants is disclosure of the situation.

In a news release earlier this month, CLAC said by the end of their meeting with Village of McBride employees Jan. 23rd “A very strong majority of employees were in favour of unionizing with CLAC.”

The letter to staff from Council says “Your jobs are not in jeopardy, whether you have CLAC as your union or whether you continue to deal with the Village directly or even seek other union representation. We support your freedom to vote your conscience.”

The letter, signed by Council and the CAO, also says that if staff choose collective representation, “the Village feels strongly that CLAC is not the right representative for this workplace.”