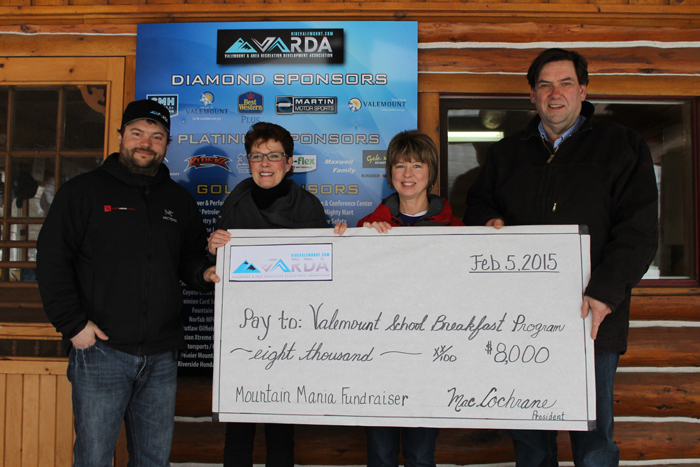 Curtis Pawliuk, manager of VARDA, says the association has been thinking of how to give back to the community more. They were considering donating the money raised at Mountain Mania 8 to a sports team, but they weren’t sure how to choose which team or sport to support. Pawliuk says he asked Dan Kenkel, principal of the high school, for some advice, and Kenkel suggested the food programs. When Pawliuk brought the idea to the VARDA board, he says they unanimously supported it right away.

Mountain Mania 8 was a banquet event organized by SnowandMud.com, an online forum for snowmobile enthusiasts. Organizers plan one banquet each year, a chance for members to get together in person, and this year it was combined with the Winter Festival, organized by Tourism Valemount, on Jan. 24th. After the snowmobile drag races during the day at the Canoe Mountain Rodeo Grounds, VARDA raised money at the banquet through auctions, donations, 50/50 and bar sales.

At the elementary school, Principal Priscilla Davis says the Parent Advisory Committee usually does fundraising and gets some funds from the District Parent Advisory Committee each year. That funding goes towards food programs and activities like bringing Missoula Theatre to the school. But this year there are not enough parents volunteering to run the PAC. In the fall and early part of the winter there was still some funding left over from last year (partly because of some cancellations due to the teacher’s strike), but no new funding was coming in. So this $4,000 will make a big difference.

“This was such a wonderful gesture from VARDA,” says Davis. She says the donation will buy mid-morning snacks and breakfasts, as well as lunches for a few kids, for the rest of the year, and will leave some extra to start off next year as well.

Jamie Black, Youth Care Worker and Sherry Nicholas, Aboriginal Education Worker at Valemount Secondary School have also started a hot breakfast program at the school. Black says School District 57 provided a dishwasher, which is required by health regulations when eggs are being served, and they’ve applied for funding from the Breakfast Club of Canada, which requires the food be available to all students in the school.

“How would you draw the line about who needs it?” says Black. “We have kids that get on the bus at 7 am; it is hard for them to have breakfast before that.” She says there are a lot of kids who come to school early, because it is a safe, comfortable place, because there is wi-fi, and now they can have breakfast too, which helps them learn better.

Mountain Mania was last held in Valemount in 2011 in the school gymnasium, and was held in McBride in 2013. Pawliuk hopes they will come back to Valemount again in a few years.