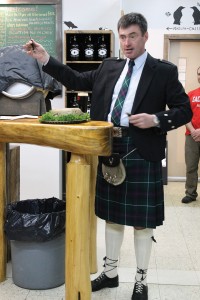 Robert Burns is Scotland’s best-loved bard – that is poet, for those not familiar with Scottish phrases. Auld Lang Syne, that confusing song we often try to sing at New Years is one of Burn’s most well known outside of Scotland, but the “Ode To A Haggis” is one of his best-known inside the old country, and may have resulted in haggis being considered the national dish of Scotland.

Burns was born on Jan. 25th, 1759, and Burns Suppers have been held in his honour on that date for over 200 years. In the Robson Valley, Morels and Three Ranges Brewing Co. celebrated with a traditional Scottish menu, featuring haggis of course, music, poetry and the tapping of a Scottish Ale from Three Ranges.

Haggis is a traditional Scottish savory pudding usually made with sheep’s innards (heart, liver, lungs) minced with onion, oatmeal and spices and boiled inside the animal’s stomach. Most modern commercial haggis is prepared using sausage casing rather than the actual stomach. It’s traditionally served with “neeps and tatties” – that is Scottish for turnip and potato. Mandy McMinn, who hails from Scotland, says the haggis is traditionally drenched in whiskey and lit on fire while the Ode To A Haggis is read, and then the “wee beastie” is cut open. Many brave souls tried a taste, but McMinn says the way she likes it best is fried in slices.

Stewart Ives, another Scot who now calls Valemount home, donned his traditional dress, including
family plaid, sgian-dubh (short utility knife, usually worn in the sock) and sporran (the Gaelic word for pouch or purse, since the kilt is made without pockets) to read the Ode at the Three Ranges Brewing Company on Friday night. 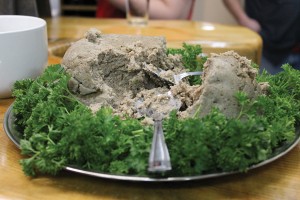