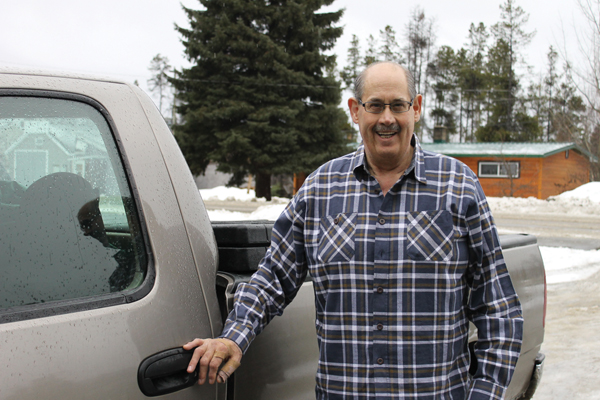 Despite losing his home to fire twice in the last two years, Buddy Hicks carries on with a big smile, just grateful to be alive and for the help he’s received so far. Now he is looking for a small trailer to move onto his property on Pine Road to live in.

Hicks’ first name is George, but that is really his dad, he says – the man who the George Hicks Regional Park in Valemount is named after. Hicks usually goes by his middle name, Russell, but he says most people in the valley remember him as “Buddy” since his school years. He came back to Valemount in 2008, and ended up staying here after he had a heart attack. Two years ago, his house on the property burnt down, so he moved into a storage space and greenhouse that he’d already started building. It wasn’t finished, but he’d put plastic up on the ceilings because he was worried about possibly breathing the fibreglass from the insulation.

This most recent fire started around supper time on Friday evening, Jan. 30th. Hicks was near his desk area and saw the flames at the back of his house reflecting on the ceiling. He ran out back and emptied three fire extinguishers on it.

“It was almost out, but…” Hicks says with a slight shrug.

He figures the fire started with the chimney, and when he realized he wasn’t going to get it out, he thought he’d grab a few things and get them away from the building – things like a generator and a chain saw that were sitting on his deck.

He didn’t want to call the fire department because he thought they’d get stuck getting down two steep sections of the driveway to his place, level with Swift Creek. He says he would have felt bad if the trucks got stuck down there and couldn’t get to another call. Besides that, he says the building was going up too quickly for them to save it anyway.

Hicks figures he only had about two minutes. He was just in his underwear because he’d been getting ready for a bath when he spotted the flames. After moving the generator and chain saw – unfortunately not far enough, because they melted anyway with the heat of the fire – he thought he could run in and grab his wallet, but as soon as he stepped in the door, the plastic on the ceiling started dropping on him, burning his back, and he got a fairly bad burn on his thumb from the ordeal.

But Hicks is surprisingly cheery, considering all that he’s lost. He says he’s lucky to be alive, and if it had happened when he was asleep, he’d never have gotten out. He says he did not have insurance for his home.

He’s been staying at the Premier Lodge, and the first few nights were paid for by some friends who were sledding in the area that weekend. He says Ali Merali and the staff at the Premier have been very good to him, as have others in the community. He got a call on Saturday night from Suzanne Bloodoff, letting him know about some help available from the Robson Valley Support Society. And Steve and Eveline Kolida also heard about Hick’s need, and gave him a few outfits of clothing, including underwear. That certainly came in handy, says Hicks with a laugh, because just one pair doesn’t get you far.

Last week, after the fire, Hicks put in an application for the senior’s housing in Valemount, partly because he has been having some problems with his vision, but he has no idea how long the wait will be. Right now he is just looking for a small trailer to put on his property to live in, and he is very thankful for the help he’s gotten already from the community.