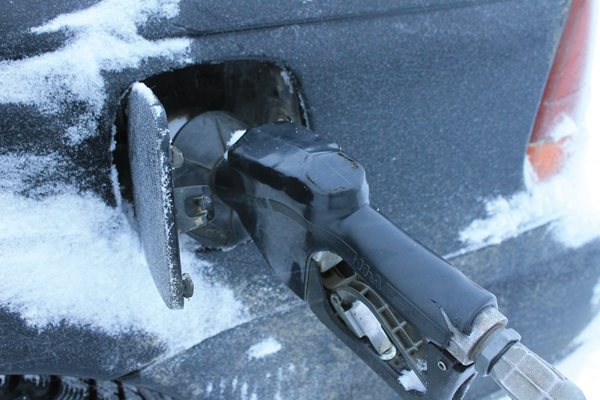 Valemount prices reported by customers on the website GasBuddy.com in mid-December were among the highest in the province for all three chains. On Dec. 10th, Shell and Tempo were both reported at 127.9 cents per liter, the highest price in the province for both chains, with Petro Canada slightly lower at 125.9. Only Fort St John and Fort Nelson Petro Canada stations were higher. At the same time, Prince George and Kamloops had the lowest prices in the province (102.9 in PG at both Petro Canada and Shell and 105.9 to 107.9 in Kamloops) and even Blue River and McBride were 6-8 cents cheaper than in Valemount. (McBride prices were reported by residents, as McBride wasn’t listed on GasBuddy.com). Even Jasper, where people often expect prices to be high, was only 106.9 at all three stations, and gas was 101.9 or less in Hinton.

On Jan. 4th 2015, with current crude prices dropping to around $52 per barrel and the provincial average for fuel in BC at 103.1, Valemount was still reporting some of the highest prices in the province – 116.9 at Shell and 112.9 at Petro Canada and Tempo. This time, Petro Canada prices were higher only in Chetwynd and Blue River, at 114.9, and Shell’s were only higher in Tumbler Ridge and Fort St John, at 118.9. Prices in Jasper were at 89.9.

So why is it so high in Valemount? And who sets the price?

John Skowronski from the Canadian Fuels Association explains the three major factors that affect fuel pricing – crude price, refining price, and local market factors. The price of crude is based on the world market, and is the most volatile. The refiners’ price is based on the North American market, just like any other commodity like wheat or coffee. Local market factors include things like transportation and taxes, but typically, independent retailers will set the price at whatever the market will bear, says Skowronski.

Valemount’s Petro Canada does not advertise their price on highway-visible signs like the Tempo and Shell do, but the price at many of their stations are listed on their website, including a breakdown of the taxes. Taxes give some clue to the differences in price between Valemount and Jasper. While both provinces pay 10 cents per litre for federal excise tax, BC’s provincial fuel tax is 14.5, while Alberta’s is only 9. Both pay GST, but BC also has a provincial carbon tax of 6.67 cents per litre. So fuel in BC is almost guaranteed to be about 12 cents more expensive on average than it is in Alberta. But that doesn’t account for all the differences.

Transportation costs may also account for some differences in prices, though the connection doesn’t seem obvious when Valemount is in the middle of three areas with very low prices, and on a major transportation route. Sources in the industry told the Goat delivery from Edmonton, though a longer distance, ensures the safest roads and more supply directly from the refinery. Delivery from Kamloops is shorter, but fuel is not refined in Kamloops, it is only stored there after being brought back up from Vancouver, so that can mean less availability and higher shipping costs, as well as worse roads.

One of our local industry sources told the Goat that owners and managers are not allowed to discuss the price of fuel with other owners and managers – something that could be construed as price-fixing, and is highly illegal. They also say most owners and managers are bound by contract not to speak publicly about pricing. And while Petro Canada is a retailer of fuel, their parent company is also a distributor. That means they can’t set their price much lower than other local businesses, because of federal competition laws – dropping their retail price too much would be unfair competition. But independently owned stations don’t want to drop their own prices too much, because they always know Petro Canada can go lower.

Would regulation help? Five provinces currently regulate fuel prices – Newfoundland and Labrador, Prince Edward Island, Nova Scotia, New Brunswick and Quebec – but the federal government says that regulation does not lead to lower prices for consumers, though it does keep prices more stable.

So what is the answer to getting lower fuel prices in Valemount? Some residents say just don’t buy it here, and many residents who work away come home with a tidy tank full of fuel. But that doesn’t work for everyone, especially those who don’t have a truck, or who don’t work away from home. Others suggest going to Jasper to fuel up, and enjoy some shopping while you are there, but driving over three hours to fuel up does not seem logical or economical.