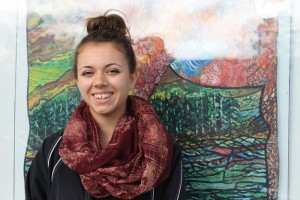 Shae-Lynn Carlson is a Grade 10 student at Valemount Secondary School, and she has been offered an amazing opportunity – to spend two weeks playing basketball internationally next summer. She just needs some help. Luckily for her, community members are already stepping up.

Carlson says she went to a basketball camp in Edmonton in July. She is not sure which coach nominated her, but in September, she received an email saying she’d been nominated as having the talent and character to be on an NBC Travel Team for the summer of 2015.

Bonnie Tucker, International Tour Director for NBC Camps told Carlson in the email they are working on destinations in the United Kingdom, Germany and Italy, and there will be two days of training and team bonding in Seattle or Calgary before the team heads overseas. The team will play about seven games, and will get to see historic sites and make new friends with other tour members, as well as experience a high level of competition. Tucker recommended she talk with her family and fill out some paperwork, as well as providing references, if she wants to go.

“It would be a great experience for her,” says Karrie Iselmoe, teacher and assistant basketball coach at the high school.

But the tour is not free. Carlson posted on Facebook asking to borrow $6000, and she quickly got a lot of response. Jessica Carruthers shared Carlson’s post, asking the community if we can get together to help this wonderful young lady follow a dream.

“What an amazing and life changing experience this could be for Shae-Lynn,” said Carruthers.

Marian Plummer says several people have already offered to donate and help raise funds, and Firm Foundations Christian Outreach has committed to paying the first $500 USD towards the deposit, due this month. Another $500 USD is due in November, and both payments are refundable if Carlson is not accepted on to a team. With Carlson’s work ethic, character and talent, Plummer is confident she will be accepted, and confident the community will continue to support her to make this once in a lifetime opportunity become a reality.

Formerly Northwest Basketball Camps, NBC Camps provides instruction for basketball players and other sports, and focuses on “building the total athlete mentally, physically, relationally and spiritually.” Overnight camps offer leadership and skills training in a Christian atmosphere. The international tours are about 2 weeks, for students aged 14 to 20, and offer an opportunity for students to compete overseas, to experience international culture, and grow their understanding of their relationship with others and God.

The total cost of the tour is over $5000 for a minimum or nine days over-seas travel, which includes air travel, lodging, uniforms, equipment and meals. Participants are responsible for transportation to the camp immediately before the trip, and for return transportation from the airport after the trip.

Firm Foundations is a registered charity based in Valemount. Contact Marian Plummer for information on how to help Shae-Lynn Carlson make her dream come true. Plummer says Carlson is getting the paperwork ready, and she’s already got her passport.