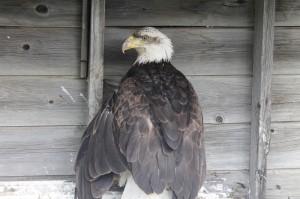 Some months ago an injured eagle was found and brought into care by the Froese family and friends. Nicknamed Hedwig (of Harry Potter fame), he first went to the Froese farm on the outskirts of McBride where he was fed and had initial veterinary care. After several days he was shipped to OWL – the Orphaned Wildlife Rehabilitation Society’s centre in Delta, BC for treatment.

Now, Mindy Dick, Bird Care Specialist at OWL, says Hedwig’s wing did not heal well, and he is continuing to struggle to be able to fly properly. As a result there is ongoing discussion with several specialists as to the appropriate surgical intervention. Rebreaking the damaged wing and resetting it all over again is one of the possibilities. A final decision is to be made in mid October. In the meantime he continues to be in care at OWL’s centre in Delta.