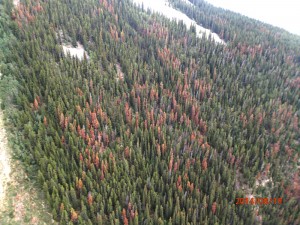 This article was first published in The Jasper Local

Every year since 2000, Jasper National Park has conducted an annual pine beetle survey. In the past, vegetation specialists have been able to count affected trees individually—10 here, a dozen there. Last year the tally was estimated to be approximately 1,900 trees.

In late August, however, when JNP’s Fire and Vegetation Specialist Dave Smith took to the air for the 2014 count, he saw so many beetle-damaged pines that he and his colleagues from the Canadian Forest Service couldn’t tally them up singly. In total, they identified over 6,000 hectares of Jasper National Park forest that has been affected by pine beetle.

Mountain pine beetles attack trees by laying eggs under the bark. The beetles introduce blue stain fungus into the tree, inoculating themselves against the tree’s ability to “pitch” the intruder out with sap. The beetle lives off the cambium layer—the tissue layer which provides cells for plant growth—blocking nutrient flow in the tree.

Eventually the tree succumbs to the pest. In its slow death, its needles turn red, then finally grey. With more beetles showing up to drain the life from more trees, it’s inevitable that Jasper’s pine forest will be killed off. That will have noticeable and potentially dangerous consequences, Smith said.

“We’re going to see the complexion of our forest change,” Smith said. “But it will also mean a build-up of fuel, which could lead to an increase in a high intensity and high severity of fires.”

While wildfire managers in the park will be taking keen notes of where fuel loads may be increasing, mountain pine beetle doesn’t have the same implications within protected areas as it does in the provincial forest. Here, we refer to pine trees as part of the mosaic of vegetation. Across the border, they’re referred to as timber.

In British Columbia, mountain pine beetle has obliterated more than 16 million hectares of forest. The insect, which travels en masse on wind currents, has been known to cause aircraft advisories in Grande Prairie. And a quick glance above Lucerne Lake, 30 km west of Jasper, will reveal the tell-tale tinge of beetle-blighted botany.

In this park, the signs are strongest in the Maligne Valley, in the Whistlers Mountain vicinity (including near the campgrounds, which will eventually create visitor safety concerns) and surprisingly, according to Smith, in the Whirlpool Valley area—more specifically, at Simon Creek. That the insect was in such a remote part of the park—with no obvious connecting corridors between it and B.C.—demonstrates just how far the beetle can fly on the wind.

“That was shocking to me,” Smith said. “That tells us that it was coming over Athabasca Pass.”
But they won’t stop there.

With a westward-trending flight path, the beetles in Jasper could be heading for prime crown forest between Hinton and Cochrane. From there it’s not unrealistic to imagine them finding their way to the great Jack Pine forests of the Canadian Shield.

“They’re already knocking of the door of Saskatchewan,” Smith said, noting that mountain pine beetle doesn’t differentiate between the lodgepoles of the west and the jacks of central Canada.

While it’s a naturally-occurring species, shorter, warmer winters in Canada’s west have allowed mountain pine beetle to breed longer and survive winters more readily. There are stop-gap measures to slow the beetle’s progress, but the only thing that will halt it in its tracks is consistent, freezing winters.

“The best case scenario would be a really cold, bitter winter or minus-thirty days in fall or spring,” Smith said.