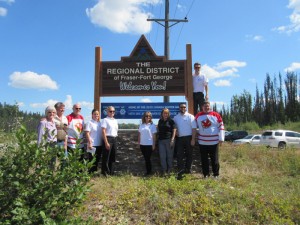 The Regional District of Fraser Fort George confirmed last week they are an official funding party of 2015 Canada Winter Games, coming to Prince George in February.

“These Games will bring tremendous benefits to our entire region and we are very excited to be on board as an Official Funding Partner,” says Art Kaehn, Chair of the Regional District of Fraser-Fort George in a news release. The Regional District has committed $1.5 million to help fund the two week national multi-sport event. The release says the funding will be used to support sustainability initiatives such as solid waste and carbon emission tracking and reductions, the Northern BC regional engagement program and the post-Games legacy program.

The announcement took place last week at the western boundary of the Regional District, on Highway 16 West, near Bednesti Lake. Chairman Art Kaehn unveiled a special 2015 Canada Winter Games welcoming sign that will greet travelers coming into the region and serve as a reminder of the 2015 Games being hosted in the area.

“The impact of hosting these Games will be felt far beyond the Prince George municipal boundary,” says Kaehn in the release. “We felt it was fitting to demonstrate in some small way that the 2015 Games is a great thing for the entire region.” The special signs will also be placed at the other four Regional District boundary signs – Highway 97 south of Hixon, Highway 97 North of the Mackenzie junction, east on Highway 16 to the Alberta Border and on Highway 5 outside Valemount.

The release says the 2015 Canada Winter Games are expected to be the largest multi-sport and cultural event to ever be held in Prince George and northern British Columbia. It is forecasted to generate an economic impact of over $90 million. Athletes from 10 provinces and three territories will compete in 19 sports with hopes of becoming Canada’s next champions.

The Lheidli T’enneh are the official host First Nation for the 2015 Canada Winter Games, the first winter edition held in BC’s history. The City of Prince George is part of the traditional territory of the Lheidli T’enneh, which stretches 4.3 million hectares from the Rocky Mountains to the Interior Plains. The word, Lheidli, means, “Where the two rivers flow together,” referring to the Nechako and Fraser Rivers, and T’enneh means, “the people”.