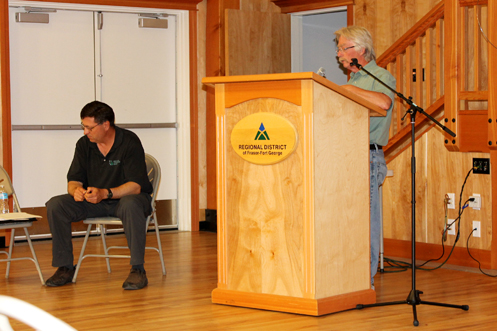 In recent days our (The Goat) staff have been contacted with requests for information on MCFC and in particular on the potential deal between Carrier and the McBride and Valemount Community Forests, because of rumours on the subject. For the record, we too have heard the same rumours going back as far as the second week of July roughly, however repeated attempts to get confirmation or even clarification from Government agencies, Carrier or MCFC have not met with any positive or negative response. Our policy (Goat) is only to report those things we have seen, heard or can corroborate from a second source – thus we have not been able to run the story. We want you our readers to know that we recognize how important this issue is to both Valemount and McBride and we will continue to monitor this story closely in the upcoming days and will report it fully when we are able.

With Rick Thompson, MCFC Board Chairman, acting as MC the meeting started promptly at 7 pm and wrapped up at 7:50. In his report, Thompson confirmed an AGM was held July 18th with the stakeholder – the Village of McBride – in attendance, at which time several items of business were ratified. These items included continuing with their current auditors, extending the term of officers for another year and continuing with one less director, as there had been no response to requests to fill the vacant director’s spot on the board. Perhaps the highlight for many of those present was the announcement that $100,000 had been given to the Village of McBride.

Thompson indicated that the Carrier discussion was still awaiting a final decision. He also indicated that the MCFC assets were currently at approximately $1.9 million with about $0.9 million in liabilities, leaving a grand total or net valuation of the corporation at approximately $1 million. This is consistent with the budget for the recent financial year. Apologies were extended because the financial returns were not prepared for this meeting as a result of the busy period just completed and the recent work done on the new office space for the corporation. A commitment was made to publish the missing financial statements within a day or two following the public meeting.
Marc von der Gonna then assumed the podium to describe the company’s work completed over this last year. He spoke about the cut size, which of the local value-added producers had taken product and how much had been shipped out of town, and what was shipped out of the area by Carrier. He did indicate that some 300,000 trees had been planted to replace those which had been harvested that summer. The company has also maintained certain rec sites plowed parking lots for snowmobile areas. He further spoke about the harvesting plans which he noted would remain unchanged over the next three years.

Thompson then asked all those present to write down their questions and suggested they would answer all those that could be answered, and would undertake to research and provide answers to any that required extra study – on the website as soon as practical.

Reference was made to some of the previous legal challenges regarding cutting near water which happened two years ago. Both Thompson and van der Gonna stated that no additional charges had been laid in that situation. It had however given cause for much more frequent inspections since.

A very technical discussion of cruising rates and the supervision and weighing of wood from the various jobsites followed. Though those present were invited to ask questions in writing through Sarah at the MCFC office.