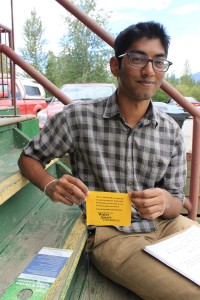 If you find a little yellow flag in your lawn in the next few weeks, don’t get upset. Umesh Anghnoo, Valemount’s Water Ambassador this summer, hopes you’ll take it as an invitation to contact him for help on how to look after your lawn more efficiently.

Valemount however is unique, in that it actually has two peak seasons – one in the summer, like other communities, but also one in the winter. Both peaks are related to hotel and accommodation usage in our peak tourism seasons, says Anghnoo, when a “ghost population” of 300 to 400 more people move in to the community for temporary stays.
Anghnoo knows that water used by hotels and other accommodations has been identified as a way to reduce overall water use. Emelia Cinnamon, last year’s Water Ambassador, worked with some hotel owners to see where their water usage was highest and where it could be decreased, and some have taken opportunities to replace fixtures with low-flow models when they can.

“This year, if I have time, I really want to audit the hotels again; or at least read their water meters and see if there has been a difference,” says Anghnoo. “But the other area we can reduce water use is in lawn watering.”

Anghnoo says there seems to be a lot of misinformation about how long you should water your lawn. Everyone says 20 minutes, but how often? Every day, or every week? He can actually go to your lawn, see how your watering is set up, and do a catch-can test. By placing catch-cans in different areas, he can see how much water is getting to your lawn. Based on that, and how much evapotranspiration there is in Valemount – how much water we are losing to the atmosphere – he can calculate how long or how often you should be watering.

“I can also give you a rain gauge, so you can check how much water you are getting,” says Anghnoo. Then you’ll know if you can skip a watering.

One of his other tasks as Water Ambassador is bylaw education. Anghnoo says people might not know Valemount has a bylaw restricting the hours you can water to between 7-10, mornings and evenings. Also, Anghnoo can give people a hose timer as part of the lawn assessment. He says he’s started using one at his house, so he can turn on the water as he’s heading out to work in the mornings.

The Village’s goals when they started the program were to see where the water was being used, and to reduce total water consumption by 20 per cent by 2015. Anghnoo says we’ve already had a 25 per cent decrease in Valemount by 2013, but why stop there? Most other communities in the Water Ambassador program have water meters, so homeowners have some financial incentive to reduce their water usage, whereas Valemount doesn’t have water meters yet.

“But I think it is still important to know if you are overwatering,” says Anghnoo. “Who wants to waste that much water every week?”

Each ambassador in the program this year also has to work on a special project, apart from doing lawn assessments. Anghnoo says his will be to create a video to educate people on how Valemount gets its water. With help from VCTV, he’s starting with a trip to Valemount’s water plant to see for himself where our water comes from and what it goes through. His goal by the end of July will be to have some video shorts that can be posted on social media and sharing sites like YouTube, to prompt people to watch the slightly longer video.

Anghnoo will be reaching out to homeowners, dropping off door hangers if he’s missed you, and yellow flags if he sees he can help you with your watering regimen. His goal is to reach at least half of the homes in the Village. To book a free appointment, you can leave a message for him at the Village’s front desk, find him at some of the upcoming Farmer’s Markets, or reach him by email, at [email protected] He says this will probably be the last year for the program, since we know now were our water is being used, and he hopes people take advantage of this opportunity.