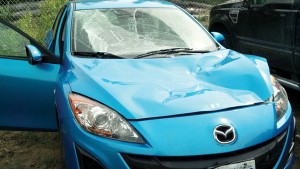 Roads through black spruce forest swamps, and spots where road salt accumulates into mineral licks present a higher risk for moose collisions, says a UNBC researcher. But collision hot spots can change over the years, and updating signs so they correspond with current high-risk areas is critical to reducing the risk.

In his recently released research paper, Roy Rea, Senior Laboratory Instructor at UNBC, characterized the environment of areas of high collision with moose in Northern BC. He found that collision hot spots were often associated with areas where roads went through black spruce forest swamps, especially those further away from water. Spots where road salt accumulates in roadside ditches, creating artificial mineral licks for the animals, were also high risk areas.

Rea says he can’t provide a map of the hot spots though, because they have actually changed since the time his data was collected. For example, the mountain pine beetle may have gone through and cleared an area that used to be a hot spot, or now an area is farmland, and it is not a hot spot anymore.

“One of the things this research has done is stimulate folks to start thinking about these hot spots and doing it on a regular basis,” Rea told the Goat via email. Because the research was done in 2006-2007, the collision hot spots he studies are already out of date and Rea says new ones have been determined by the ministry. He says new warning signs have been recently installed in the Robson Valley area, which speaks to the ministry’s use of recent data, one of the recommendations of his paper.

The Ministry says there are 42 moose warning signs along Highway 5 and 16, between Kamloops and Prince George. It uses two methods to place wildlife signs; either through requests from wildlife and environmental agencies who identify areas of concern; or through data gathered from the ministry’s Wildlife Accident Reporting System, which tracks species and location of each animal killed on highways.

The Ministry also says the number of animals killed on BC’s highways has gone down since 2005, even with higher wildlife populations and more drivers on the road. Still, wildlife collisions were targeted in the Ministry’s recently completed Rural Speed and Safety Review. It identified ways to improve safety on specific corridors with higher collision, like installing gateway signs, and increasing the use of flashing LED warning signs and wildlife fencing at high crash locations.

Rea is now working with the ministry to see how often moose, deer and other wildlife visit roadside mineral licks, and what can be done to make them less attractive to animals. He’s also working on another project to track where moose are spotted along highways, instead of just tracking where they are hit, but that project is still in its infancy. This may help unravel better ways to decrease the risk of collisions, but he thinks that anywhere roads cut through black spruce forests/swamps, moose will tend to get hit.

“Putting a road through good habitat will cause deaths of the critters living there,” Rea says.

Rea’s paper, Characterizing Moose–Vehicle Collision Hotspots in Northern British Columbia, relies on accident reporting data collected by the Ministry of Transportation and Infrastructure between 2000 and 2005. The paper will be published in the upcoming issue of the Journal of Fish and Wildlife Management, and is currently available online at http://fwspubs.org/doi/pdf/10.3996/062013-JFWM-042.