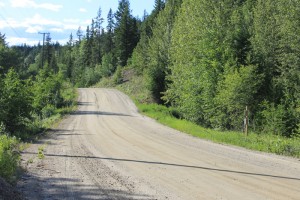 A permanent two-lane bridge will replace the culvert at Packsaddle Creek along the East Canoe Forest Service Road this fall.

The project consists of both a structural upgrade and improved passage for fish, and Bethel says it will be a considerable improvement, replacing the existing undersized culvert.

The ministry has no plans to build a temporary crossing, as it would considerably increase the cost of the project, and the road is surrounded by private land. The East Canoe Forest Service Road will be closed for a short period to complete the work. The exact date and length of the closure is not currently known, says Greig Bethel, spokesperson for the Ministry of Forests, Lands and Natural Resource Operations, because the job has not yet been contracted out. However he says it will be sometime between Sept. 15 and Oct. 15, 2014.

Frank Meersman, who has a trap line accessed from further down the East Canoe road, says he hadn’t heard about the closure yet, but it usually takes a little while for information to flow to this area, since the Ministry no longer has an office here. He thinks there is an old bridge that wouldn’t be that hard to repair well enough for the limited traffic that might want to use it at that time of year, but he doesn’t foresee any issues for accessing his trap line.

The Canoe Reach Marina and a number of campsites are also accessed by the East Canoe road, so those sites and some hiking trails will be affected during the closure. Owen Torgerson, President of the Valemount Marina Association, which maintains the marina and campsites, says the closure will temporarily hamper access, but he commends the ministry for improving the crossing.

“This upgrade will only provide safer recreational access heading into the future,” says Torgerson.

Bethel says the Ministry scheduled the construction later in the year to minimize impact on the public and to take advantage of lower water levels and the lack of snow and frost. There is at least one driveway past Packsaddle Creek. The ministry says it contacted all private landowners in the area, and that property is generally rented out in the winter season, so won’t be affected.