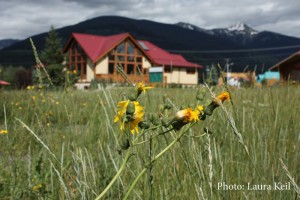 The provincial government is giving the Northwest Invasive Plant Council an additional $295,000 to help control the spread of invasive plants this year. About $65,000 will be used in the Robson Valley management unit this year, says Mike Trepanier, Executive Director of the Council.

“Protecting native plants from invasive species is important, as invasive plants can cause lots of damage to the natural ecosystem,” Prince George-Valemount MLA Shirley Bond said in a release last month. “We must continue working to combat this issue.”

This funding is in addition to the $809,000 already earmarked by the provincial government for invasive plant control and management throughout the province in the fiscal 2014-15 year.

Invasive plants are species that have been introduced into B.C. from other areas. They displace native vegetation and can cause considerable economic and environmental damage, and pose health risks, says a statement from the BC Liberal Caucus. Invasive plants may disrupt natural ecosystems, reduce biodiversity, increase soil erosion, alter soil chemistry and adversely affect commercial crops.

The invasive plant programs identify sites where invasive plant species have been found and respond to contain and eradicate them before they become established and start spreading.

Andrea Eastham, Field Coordinator for the Council says this year’s strategic plan, which identifies target species and local area priorities, should be finalized in the next couple of weeks.