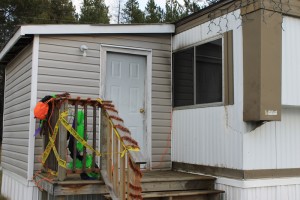 A fire in a residence on Nov. 7 has forced cousins out of their home.

Valemount Fire Chief Rick Lalonde says electronics in the living room appear to have started the fire, but the gyprock wall prevented a greater tragedy.

Kimberly-Anne Byford, daughter of the owner Cheryl-Ann Byford, was living in the home in Cranberry Trailer Park on 13th Ave. with her cousin Lynsie Shalla and Shalla’s one-year-old.
Kimberly-Anne told the Goat she was at the vet’s office with her dog Pancake when the fire started.

“I pulled in and the windows were black.” She says she went to the front door to try to get her two cats out, but it was so black and full of smoke she couldn’t do anything. “All I could do was wait for the fire department.”

A neighbour noticed the smoke and called in the fire around 11a.m..

The fire did not spread because of the interior construction of the home, and it took just a few minutes to put the fire out. Fortunately the tenants were out, but smoke and heat damage have left it uninhabitable, and may have destroyed much of the contents.

“I’m just thankful for everyone, the fire fighters, the people who were there when it started and called…,” said Kimberly-Anne. She has found both cats with the help of friends and neighbours. “If it wasn’t for them my house would be gone and my fur babies would be too.”

Lalonde notes the fire was likely caused by component failure in the electronics.

“Those components are all made of plastic that’s combustible at low temperatures,” he says.

It is not known yet if the house is repairable, but the cousins are staying with family, and have found a new place to rent. They believe most of their belongings were damaged, but they already have offers of help from family and friends, and through social media.

Kimberley-Anne agrees that we live in a great community.

“I’m glad I came back to Valemount,” she says.