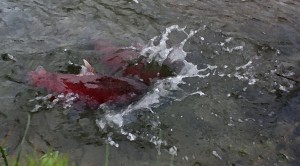 Scientists haven’t discovered this yet, but there’s a common psychological affliction that affects the salmon who are surging hundreds of kilometers upstream this time of year to mate before dying.

I have it on good authority, though, that this mental illness is quite common, tested and documented among the silly, neurotic salmon, hell-bent on spending their last moments in the same stream as their first. This authority has even given the affliction a name: the implosion syndrome or, simply, IS.

IS lies latent within the tiny fishy brain, induced when the salmon begins its journey inland. At that point it’s forced to reconcile one memory—that of the fathomless depth and hidden dangers of the ocean it recently left—with a new one—the increasingly thinning supply of water it finds itself in as it continues its biologically-driven (and insane) journey up narrowing creeks and spurting rapids.

The thing to do, of course, and any healthy salmon knows this, is simply to forget the ocean. Pretend it didn’t happen. Submerge in the nostalgia of fry-youth. An ordinary salmon brain doesn’t struggle with this at all. But there are others who just can’t reconcile the two extremes. Some of these don’t even know their brain is trying to reconcile the two, but when they climb their first or second rapid, there’s a tearing moment: an implosion. They crack under the awareness of two irreconcilable and profound extremes.

Symptoms of IS are pretty easy to detect among salmon: apathy, sluggishness and atheism. Only the strong will reach their home stream, and those suffering from IS are very rarely among the strong. Instead they meander about the mouth of the river, ridiculing the others who are still driven by blind ambition. The sarcasm these fish are capable of would whither the scales off any species of fish. In fact the respectable aquatic life that make a home in the mouth of a river are often aghast at the bitter vitriol muttered by these salmon.

But Moose the salmon was different. He suffered from a relatively rare form of IS called Hyperbolic IS or HIS. Most of his metabolic processes actually went into overdrive when he was jumping up his first set of rapids.

Fish suffering from HIS display symptoms that are, in some ways, opposite of those suffering from IS. They’re energetic, every cell in their body drenched in adrenaline. But the contradiction in symptoms is an illusion; the underlying cause is the same.

The most prominent symptom of the HIS-afflicted is the belief they can fly. Jumping over rocks and rushing water, feeling the sun directly on their scales and the unmitigated air on their gills, their aim is actually to soar indefinitely through the air much like they did in the ocean. Silly fish. As they try again and again to break the confines of water and gravity, a glimpse of the purely insane can be detected. But like many mental illnesses, a glimpse of the purely brilliant is there too.

Moose the salmon was different in yet another way: he was a gay salmon. Now the gaydar of human scientists in day-to-day life among other humans is paltry indeed; but when it comes to detecting sexual diversity among fish, they’re just hopeless.

Moose, for example, would never have been detected as being gay for he was aptly named: strong, virile, muscular, large—traits that made him appear as an exemplary specimen among male salmon, nothing to label him gay with.

Moose was never compelled by the urge to procreate. All of this competing-for-females nonsense he encountered among other salmon was just a bit of homoerotic fun for him. If he had thought about it—and he didn’t because he was a fish—he may have lamented the lost opportunity to pass on his robust genes. But then who knows everything that the perpetually moving river carries downstream, and where it may deposit things?

Moose had had a few torrid love affairs with other gay salmon—mostly “in the lobster trap” or “in the closet” as humans say—but when his school of fish began their long ascent inland, many of them suffered from IS. Moose left them and their caustic attitudes behind.

At the beginning of his swim inland, Moose was happy to follow the group. He quickly proved himself among the most strong and capable of salmon. More than a few females practically threw their eggs in his direction, hoping to be blessed by his seed. But Moose didn’t have a clue of what was going on.

As he got further and further inland—the water ever more shallow, the rapids ever more jagged—he noticed his fishmates settling down in gravel beds, gyrating spasmodically, and then floating belly-up, swept downstream.

What on earth happened to them? He wondered. Where the heck are we going anyway?

What confused him most was the complete willingness and look of supreme satisfaction in the eyes of these fish, moments away from death.

He shrugged his fish shoulders, and swam upstream with even more determination. The flying-symptom of HIS was taking over.

He surged past fish after fish – the first to scale a rapid; the highest jumper; the fastest swimmer.

Pretty soon he noticed he was alone.

Swift Creek was his home stream, but he swam full speed past all of the gravel nests, past the bend just upstream from the highway and Valemount visitor centre where his own life began, and even somehow past the dam and water intake that served as the town’s water supply. Before he noticed he was alone, he was climbing Swift Creek Mountain, past the fallen bridge. Without any other fish around, especially males to “vie” for females with, his sole preoccupation became to fly.

He had already gone higher upstream than any salmon before him—not that any human or fish was there to record his feat—but he pushed on, higher and higher, believing that his chances to break free from the water entirely was just above the next water fall.

A few times Moose landed outside of the water, flapping on rocks and logs that clogged up the stream. He had no idea where he was going, why he was trying so hard, but those moments gasping for water on the edge of the stream were nearly euphoric. He was closer to flying than he’d ever felt. But eventually gravity felt like a dead weight on his body, so he flipped and flopped back in the stream and set his sight on the next waterfall.

Finally he reached the ground spring of Swift Creek. Water was barely more than a trickle, just enough to cover the rocks. Moose, with his hulking frame and bristling fins, was mostly out of water. He was weak and delirious, not having eaten since leaving the brine buffet of the ocean. All of his friends were dead, swept back out to the black ocean depths. But he was closer than ever to flying. He knew it. If he could just mount one last leap, one last attempt to clear the ground spring, he knew he could fly.

With every last iota of energy in his failing body, flapping in the thin film of water that coated his underbelly, he gave it one last try. And he cleared it! He flew up, vertically, two meters according to some marmot witnesses that looked on, bewildered. And just before he reached the zenith of his leap, he looked about and saw cascading mountains, rolling hills of trees, glaciers, a valley bottom with scurrying ants and gleaming windows—he was flying! The sights, the beauty, filled his tiny fishy heart with pure awe.

He died before beginning to fall. His body soared clear over the mountain peak, plummeting some 1000 meters on the other side, but Moose didn’t know that. All Moose knew, just before he died, was that he could fly.