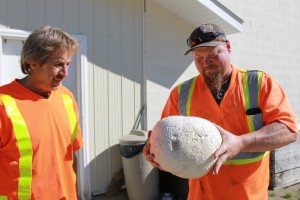 Valemount Public Works staff Donnie Venance and Duane Smith noticed what they thought was a soccer ball at the sewer treatment property. Instead, they found this massive puffball mushroom.

A puffball is a type of mushroom that does not have an open cap with spore bearing gills. Instead, the spores are produced internally, and eventually the puffball will dry or split, often releasing a “puff” of brown dust-like spores.

True puffballs do not have a stalk or stem, and are edible before the spores start to form. The Mycological Society of San Francisco recommends cutting the mushroom lengthwise, and checking for an all-white interior (spores haven’t started forming) and uniform texture (ensuring it is not an immature Amanita species that looks similar to a puffball before cutting) before eating. They offer some great recipes for puffballs at http://mssf.org/cookbook/puffballs.html.

So far, no one has volunteered to try cooking it.