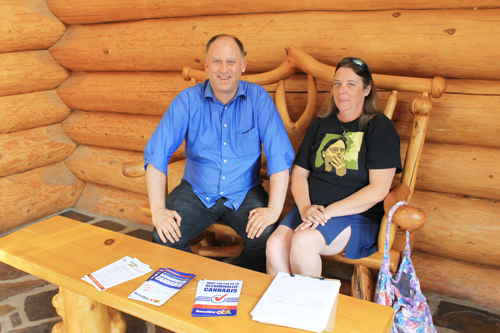 Dana Larsen, Director of Sensible BC, is on a whirlwind tour to recruit canvassers to try to bring a public vote on the decriminalization of marijuana in BC.

Larsen is sure that a public vote would go in favor of decriminalizing and working toward legalizing marijuana, but “getting on the ballot is the hard part.”

Larsen and Tour Coordinator Cindy Heemeryck stopped in McBride and Valemount on Thursday and met with small but interested crowds to talk about the “monumental effort” required to get the proposed legislation to a potential vote. Sensible BC needs to collect signatures from at least 10 percent of the registered voting population in each of BC’s 85 electoral districts, within 90 days starting on September 9.

The proposed legislation, the Sensible Policing Act, has four parts. First, it would stop police from spending resources on possession of marijuana by adults; it would add cannabis to the liquor control act so it would be kept out of the hands of children in the same way that alcohol is; it would require the province to lobby the federal government to repeal cannabis prohibition or grant BC an exemption; and it would require the province to start designing a framework for how legalized cannabis would be regulated, sold and taxed in BC.

Valemount Council sought input from the local RCMP before deciding to endorse the Sensible Policing Act to the Union of BC Municipalities. An administrative report to council at the August 13 meeting says “The RCMP are sworn to uphold existing legislation as it stands. The RCMP also note that cannabis use is governed through Federal legislation which cannot be superseded through Provincial legislation.” Council voted in favor of endorsing the legislation to the Union of BC Municipalities (UBCM) this fall.

Larsen points out that the proposed legislation does not attempt to supersede federal legislation. It would amend the Police Act, which gives the RCMP the authority to operate in the province, and would direct the RCMP to not pursue simple possession by adults, in the same way that many other laws (such as the laws about bongs and other paraphernalia) are not usually enforced. He notes that the first three drafts of the legislation were rejected by Elections BC, but this fourth draft has been accepted, meaning Elections BC has confirmed the legislation is within BC jurisdiction.

If enough signatures are collected between September and December, a legislative committee could decide to send the Sensible Policing Act to the legislature, or to a public vote, which would happen in September of 2014.

Larsen says they have registered approximately 1000 canvassers so far, and hope to register another 1000 before September 9. He expects more will register throughout the collection period as well. He notes that anyone can canvass in a public place, and no one has any legal grounds for taking discriminatory or punitive action against a canvasser, but that the full backing of Sensible BC and its legal resources would be behind anyone who encountered problems.