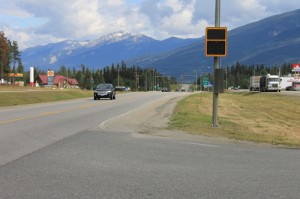 There were no major incidents in the Robson Valley RCMP region over the Canada Day long weekend. Sergeant Darren Woroshelo reported there was only one minor Motor Vehicle Incident – a fender bender involving a travel trailer near Mount Robson on July 1 with no injuries.

Extra staff had been deployed to cover the increase in traffic volumes across all categories (commercial, tourism) over the previous week, due to the closure of Highway 1 near Canmore Alberta. RCMP were out in full force again for the long weekend traffic, patrolling a stretch from Blue River to McBride and to the Alberta border. There were 146 violation tickets handed out, including three excessive speed infractions, a couple of small drug seizures and one person had their license suspended for 24 hours for driving while under the influence of drugs.