There are 13 confirmed deaths from the train derailment and subsequent explosions and fire that shook a small Quebec town earlier this week.

The catastrophe happened around 1 a.m. EST Saturday in the core of Lac-Mégantic, a town of about 6,000, 250km east of Montreal. The rail cars, 73 of which were carrying crude oil according to a spokesperson from the Ministry of Environment, are owned by Montreal Maine & Atlantic Railway. At least four cars were involved in the explosions, and some crude has leaked into the Chaudière River, but the total amount is still unknown.

The cause of the derailment is being investigated.

Could the same happen in Robson Valley?

In early June, The Goat published an investigative feature on the increasing transport of crude by rail through Northern BC. 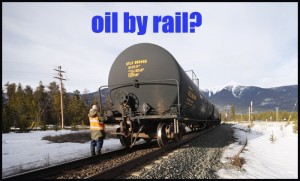