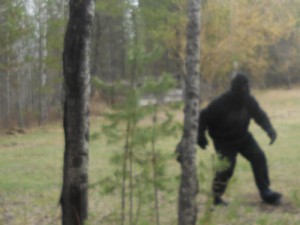 Bigfoot was spotted in Centennial Park, Valemount BC, on Saturday, May 4, 2013. Dozens of locals were gathered for the kickoff of a new campaign called Walk Around the World, which challenges locals to get out and walk for their health and well being.

One of the suggestions of the program is for folks to use the new three kilometer loop trail around the village, which has now been dubbed “The Bigfoot Trail.” Locals say they won’t let the sighting deter them, they are taking to the trail (on foot as well as bike and stroller) by the dozens. At least 100 have joined so far, which is a great feat for a village with a population of approximately 1000.

Photos of the elusive creature were captured by at least two residents. When asked about the sighting, Hollie Blanchette, one of the organizers of the campaign said “I guess even Bigfoot wants to Walk Around the World.”

With previous sightings of Bigfoot in the Tete-Jaune Cache area, these latest sightings suggest Bigfoot may be expanding his territory. If you see Big Foot again, please remember he’s a highly protected species, and could be very dangerous if confronted, so keep your distance, and show him respect.