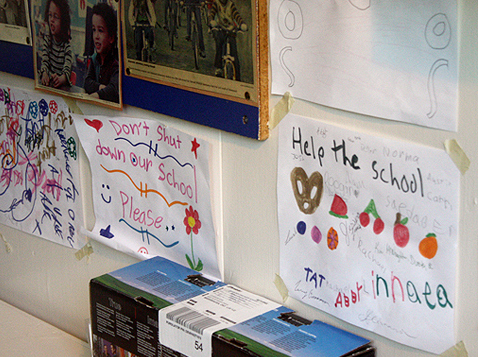 When the Dunster Fine Arts School held its final concert with schoolchildren in June 2010, all 27 students (K-Gr.7) sang a song they helped write with teacher Sharon Stearns. The children recounted memories from their time at school – playing outside, being stung by a bee, learning together. The gymnasium was packed with parents and community members who laughed and teared up at the children’s lyrics.

Three years later, the chorus of that song – “Nothing stays the same” is truer than ever. But the Dunster Fine Arts School Society is embracing that philosophy.

Half of the school building is already paid off and numerous renovations completed. The fight to keep the school open is built on a deep dedication to the community, members of the society will tell you. It’s the whole community that has kept the doors to the school open, even if public school, per se, doesn’t happen there anymore.

The Society purchased the building from the school district in October 2010 after eight months of negotiations to keep it open. They have already paid off $23,000 of the $43,760 bill in two and a half years.

Everything is fundraised. But the joy of giving is what keeps the school alive. As they argued so many times to the school district during those dark days three years ago, the school is the heart of this community.

In some ways it’s used more than when it was a school, says one member of the society. The Society has latched onto a new concept – a community learning centre for all ages which offers workshops, computers, and recreation. Last week the school was filled with up to 18 people each day for a Joel Salatin teleconference workshop on farming, broadcast from Calgary. Each month the school hosts a band that helps raise money for its mortgage.

The learning happening inside the school walls is not just for the schoolchildren during school hours any more.

“I always argue with people on this,” says Society member Pete Amyoony. “It’s still a school in the true sense of the word. It’s not controlled by government and bureaucracy. It is a community school.”

For a group that challenged the school district for months to keep the school open, staged an occupation of the school, offered school classes in tents next to the building, and finally bought the school from the school district and kept bills paid, it’s true what Society member Irma Brownlee says – “There’s lots of learning going on.”

Last week a dozen members of the society met for their regular meeting to discuss the mortgage, grant monies, new purchases and upcoming fundraisers. The group scolded Chantal Swets for writing the agenda on the chaulkboard too small to read – even so, it filled up one of two chaulkboards.

Along one wall are a row of computers that can be used for $2/hour. Swets’ two children play games quietly on the computers. The kids were two of the students that used to attend the school when it was still run by the school district. Since that time they have attended classes in tents near the building and homeschooled inside the building. Now that it’s become a learning centre, they can come in and use the computers and take part in other activities.

Before the formal meeting, attendees toured the school to see the new features. The society received a $25,000 New Horizons grant last year, money that is earmarked to encourage senior citizens to participate in their community. A new wheelchair ramp makes the school bathrooms accessible. A new barbecue is still in its box. A ride-on-mower has already been used to trim unruly grass at public places all over Dunster. A new shower room will make the school a great camping site. They have talked about an elder hostel and a youth hostel, among other ideas. The sports fields have also seen lots of use, especially with a new outdoor arena with lighting for nighttime skating. The rink was built by several community members. 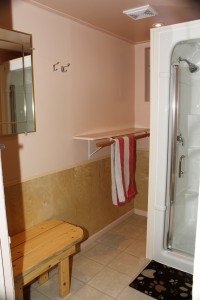 Piano lessons, movie nights, Ukrainian easter egg painting, apple grafting, and guitar lessons are some of the things that have already taken place in the building.

“It’s something for the community to use for years to come, rather than have it boarded up or derelict or bulldozed,” Amyoony says, adding that the bulldozing was a real possibility when the school was shut down.

Someone has booked the school for a week this summer for a wedding. It is being rented out for a steal of a deal – just $100/day for access to the school and grounds including bathrooms, kitchen and shower.

The building itself is in great shape, Amyoony says. It helps that a few years before it closed the school, the school district installed a new roof.

The maintenance is shared by community members. Some of the meeting attendees peered into a storage closet and saw it was neatly arranged.

“I don’t know who did that,” Amyoony said. “When I came in today it was like that.”

“We originally thought that was all we were going to have to do,” Swets says. “We thought ‘Oh, how are we ever going to raise all those funds for the maintenance?’ Now we’re thinking, by the time we’re just doing maintenance, it’ll be a piece of cake.”

The Society has partnered with other local organizations such as the Robson Valley Music Society (RVMS) and the Dunster Community Forest. They say the support from the RVMS and the whole community has been huge.

History of the effort to save the Dunster school:

In April 2010, the school district voted to close the Dunster Fine Arts School, citing low enrolment and the benefit those children would have in McBride and Valemount schools that were also dipping in enrolment.
The community staged a sit-in, where they occupied the school for 5 Days. The school district sought a supreme court injunction which ordered them to leave or face arrest.
During the sit-in the Dunster Fine Arts School Alive was born which later became the Dunster Fine Arts School Society. The society collected more than 100 memberships that summer.
The society negotiated with the school district to allow them to offer homeschooling inside the building, which they sold to the community for $43,700. Seven students took part in this during the 2010-2011 school year.
The school district told the Society that if they found 20 new children for the district – either home schooled kids, kindergarten students or new arrivals – then they would re-open the school and provide a teacher.
But they could not find 20 new children, and a year after the school closure, many children had settled into new classrooms in McBride or Valemount. Some families moved away to avoid a half hour commute or hour-long bus-ride from Dunster.
Since that time, the Society has changed its focus to marketing the school as a community learning hub – one that offers computers, workshop space, gym, sports field and daycare room.
In a miraculous two and a half years, the Society has paid off more than half its mortgage and put $25,000 worth of renovations and additions into the building.
The community of Dunster has a population of roughly 300 people. It has a general store, post office, community hall, transfer station, and schoolgrounds.
The school will turn 100 years old in 2015.