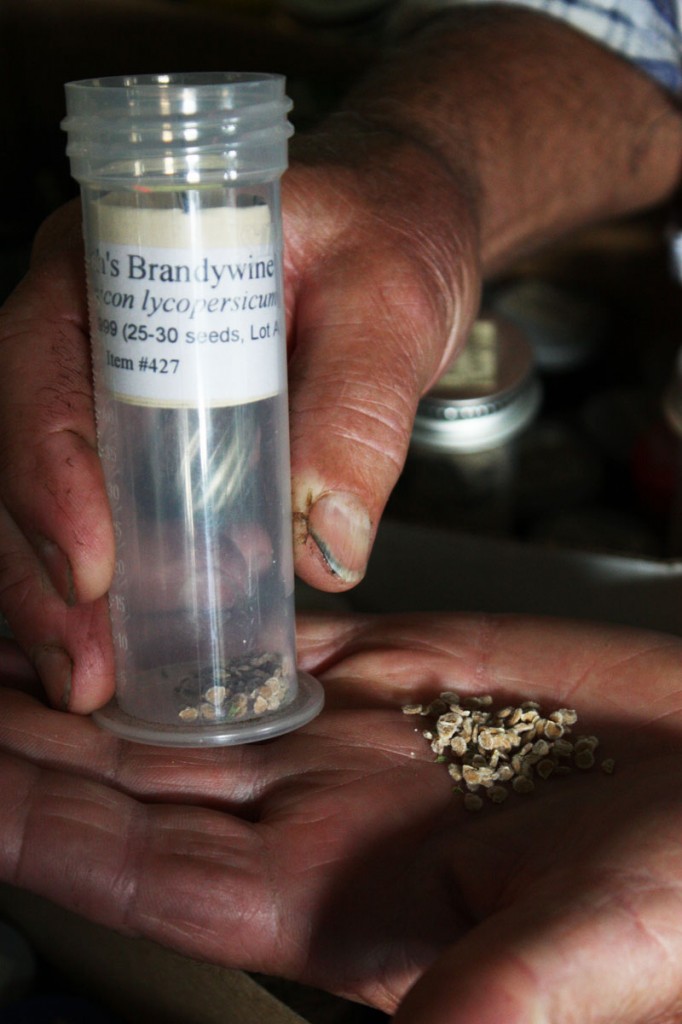 It looks like an ordinary tomato plant except for one thing: the “Rocket” comes from a heritage seed – increasingly rare and precious to keep.

Pete Amyoony’s greenhouse is full of these antiques such as the Stone tomato and the German Pink tomato. These are just some of a dozen heritage plants he is dutifully caring for. Without growers like him, these plant varieties would be long gone.

Amyoony is part of a network of global growers who are collecting endangered seeds so they can continue to exist. Some heritage species, like the Stone tomato, are kept by just two growers in the entire world.

Down a steep ladder in Pete Amyoony’s basement is where dozens of these seeds are kept cool and dry. He takes care of 170 tomatoes and 60 potatoes. Anyone in the world can order seeds from him.

Every year we lose an average of 300 varieties of vegetables around the world, Amyoony says. Without someone growing and saving the seeds, these varieties will never be able to grow again.

In the 1980s big corporations like Monsanto bought out a bunch of mom and pop seed operations, he says.
“The seed operations used to grow local varieties that did well,” Amyoony says. “If there were Robson Valley seeds, they grew well in the Robson Valley.”
He says within three years, the big companies had taken over 90 per cent of the seed companies of North America and they threw out most of the heritage seeds – the ones people had been growing in those local areas for hundreds of years.

Why? They wanted to hybridize the seeds so they couldn’t be saved and farmers would have to buy new seeds from the company every year, thus increasing the company’s profits, Amyoony says.

“It’s a money-making thing for the corporations.”

Once people realized the extent of the seeds being lost, they started a seeds saver exchange. People would buy endangered seeds and keep strains alive by planting some every year and offering the seeds for people on the exchange to buy.

Every year they come out with a book containing thousands of varieties of seeds available from each other so they don’t depend on the companies.
The catalogue – as thick as a phone book – keeps getting thicker as more varieties are de-listed and can no longer be sold as certified seed. It offers thousands of older varieties of garden vegetable seeds you can order from individual growers like Amyoony.

Green mountain potatoes were grown in the 1930s and exported by the railroad carload out of the Robson Valley. Caribou Potatos were also de-listed since the stem stayed attached to the potato, and was not good for commercial planting.

“They’re beautiful potatoes, they keep the best and they were developed for northern British Columbia in Prince George in the 1950s and 60s.”
Amyoony says the government limits the number of varieties that are available as “certified seed” – in other words, varieties that may legally be sold commercially. The idea is to protect commercial interests, he says.

Once de-listed they cannot be sold as certified seed.

“It’s awful. It’s like taking our heritage. Those potatoes and tomatoes have been developed over hundreds of years and saved by our grandparents and great grandparents because they were the best ones for our area.”

Dunster resident Floyd Caywood came to the farmers market about 15 years ago where Amyoony was selling tomatoes. He said “Oh those are good looking home grown tomatoes, but you’ll never find one like the ones I used to grow as a kid in the 1920s.”

It was called Stone tomato. Caywood said he couldn’t buy them anymore because they stopped producing those seeds.

Amyoony didn’t let on that he was a part of the seed exchange. He went home and in his seed exchange book found two people in the world who still had Stone tomato seeds – one in England and one in California.

Amyoony got the seeds and grew a plant for Caywood. Ever since then, he has grown a plant for him in his garden.

Because the heirloom plant varieties were grown for specific locations and for taste, rather than commercial interests, they are often jucier, more flavourful, and have a better texture.

But not all the varieties are desirable.

This year someone brought him an heirloom pepper – the hottest pepper in the world. It’s rated 1 million Scoville heat units. The Jalapeno is 3,000 and the habanero is 50,000.