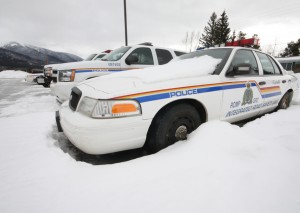 With four officers on medical leave, the Valemount RCMP detachment is now down to three officers to handle general duty and traffic until May at least.

Cpl. Trevor Prosser says with fewer officers, all officers are being forced to remain available for any type of call.
“We’re trying to fill in where we can,” he says. “We’re all responding to what happens to be the need of the call.”

Cpl. Prosser says the number of officers allotted for Valemount is based on the need to respond to general duty calls. Three of the seven officers are usually designated as strictly traffic members.

He says he, Const. Simon Bentley and Const. Ron George will be looking at their priorities and deciding which items they will focus on.

They expect a new permanent officer to join the detachment in early May, he says. Until then, the McBride detachment may provide some backup for the division. On Tuesday, Const. Peter Berndsen of the McBride RCMP came to Valemount as backup. McBride Cpl. Barry Kennedy says because their division only has three officers at full strength, they can only afford to loan one officer at any one time, as they must keep two available in the community.

“If they need us to help, then that’s what we’ll be doing,” Cpl. Kennedy says. “If we have an available member, we’ll send them over to help.”

Mayor Bob Smith says he will be speaking to the local RCMP about the shortage, likely when he returns from travels in April.

“It’s a definite concern with us,” he says.

Cpl. Prosser says they are doing what they can to make sure the remaining officers can continue doing their jobs in a healthy way. He says regardless of how many members are on duty, burn-out can be a problem.

“That’s part of my concern,” he says. “Not only that our community is looked after, but that our members here are looked after from a mental and physical health standpoint as well.”

“We will be covering as many hours as we can, keeping in mind that our members here need their own time off. It’s a risk management thing.”

Shirley Bond, MLA for the Robson Valley and the new minister for public safety, says she will be looking into the situation.

Last year the Village paid $47,000 for policing costs. The amount is calculated by the provincial government and the money is raised through taxes.

Cpl. Prosser says there is still the option to bring in temporary help from larger centres if there is any big event.