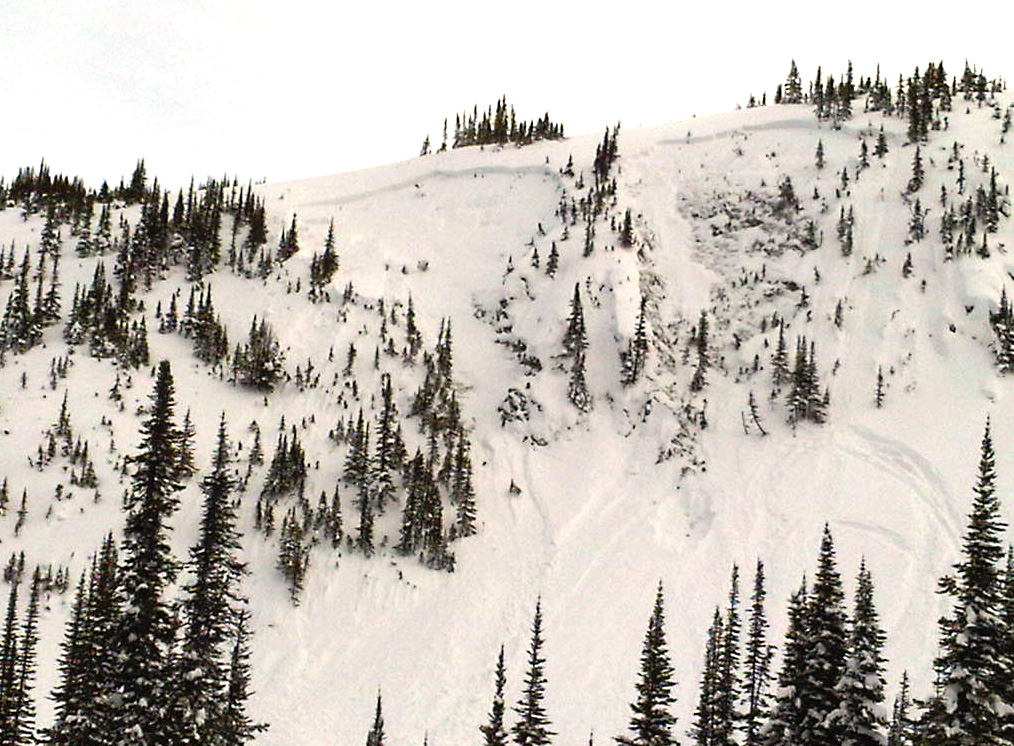 “You could see the whole hillside across the ridge fracture. About 250 feet across.”

An ordinary day-trip into the backcountry nearly turned tragic last weekend, but technology and the astute wits of friends prevented it.

Matt Elliott, 33, was out with a dozen of his friends – men, women and teens – on Mt. Lucille. They started out around 10 a.m. and a few hours later they had congregated at the base of a high ridge where they each took turns high marking the slope. It was a large group and almost all of them were avalanche-equipped. They parked a distance away because of the avalanche risk.

Elliott had been in that area many times, as his house is just 10 minutes away. He decided to run up a steep narrow passage they call the waterfall chute, with rock shelves on both sides.

He said he knew it was risky to go up that chute since the it was fresh snow. But he had climbed that chute once or twice a year for the last few years. He’s also no stranger to avalanches, having witnessed about a dozen.

“Most of the time I was able to outrun them with the snowmobile.”

He’s even been buried, but was always able to dig himself out.

On that Saturday, he watched one of his buddies high mark the slope and return.  Then Elliott drove up standing on his sled and adjusted his helmet for a few seconds before accelerating away from the group.

It took less than 10 seconds to drive up into the chute and slow to a halt.

“You could see the whole hillside across the ridge fracture. About 250 feet across.”

At that point everyone realized the situation. Elliott jumped off his sled, pushed it away from him, and started sliding down with the avalanche, feet-first. He swam with the current for about 20-30 feet when he went over a small rock ledge about 10-15 feet tall.

Gainer ran towards the slope, since he knew the slide wasn’t going to come all the way down. He tried to see where Elliott would end up. He was still above the snow, at least until his chest. But the avalanche occurred in two waves, Gainer said. The second wave overtook him.

His sled was still visible as it tumbled down the hillside, its headlight visible on a low-rez video someone was filming when it happened.

Elliott had an air-bag on the avalanche chute but the way he came off he wasn’t able to pull it. He remembers what it felt like buried under the heavy powder, even though he lost consciousness after about a minute: “You can’t move any part of your body, not even your fingers,” he says. “It goes dark and you can’t really hear anything.”

Gainer ran up the slope as fast as he could through three feet of soft snow, but Elliott was already under the snow. His sled was still running, the handle bars sticking out.

Everyone turned off their beacons and turned them onto the “search” function. They yelled his name.

They used their beacon to locate the rough location of his body and then used long narrow probes inserted into the newly packed snow. It took three tries for Gainer to hit Elliott’s helmet with the probe – seven feet underground. They started digging.

“It was like quicksand that granular snow,” Gainer said. “It kept sliding back into the hole.”

They uncovered his head first. He wasn’t breathing.

“I reached down and took his goggles off,” Gainer says. “His face was just black and blue.”

He had been under 10 minutes and they were worried that he could be dead. Soon after they uncovered his face, however, he started breathing on his own – what sounded like snoring.

“I just remember all these faces looking in at me,” Elliott says. “I’m very thankful they’re all good shovelers.”

The lack of snow around his face leads Gainer to think there must have been an air pocket there that must have lent him extra time.

“It seemed to take so much longer than it actually was,” says Carla Trask, another person who helped dig out Elliott, who also works on search and rescue. “It was pretty intense, I’ll tell you that.”

Gainer is 6-feet tall and couldn’t see out of the hole they had dug to excavate his friend, meaning it was at least seven feet. “It’s an eye-opener,” Gainer says. “We all should have known a lot better.”

Miraculously, Elliot was not injured and was able to ride his own sled back home.

Elliott says he plans to be cautious now about who he rides with and will make sure everyone is avalanche-ready, as they were on that day. He said he’ll also take more heed of the signs and avalanche conditions.

His long-time girlfriend Sara Olofsson said she was pretty upset to hear what had happened.

“Lucille is the family riding area,” she says. “It’s not a rough out-of-bounds spot. Riders are hitting it all the time.”

She says he’s very respected in terms of his knowledge and safety level. And he had all the avalanche equipment he could have had on.

“You’re upset to a point but you’re speaking to the person so you know they’ve alive. When people started calling me, I realized how bad it actually was.”

“He is a daredevil by all means,” she adds.

She says the biggest mistake they made was due to the timing of their trip, since the weather conditions had led to a high avalanche hazard.