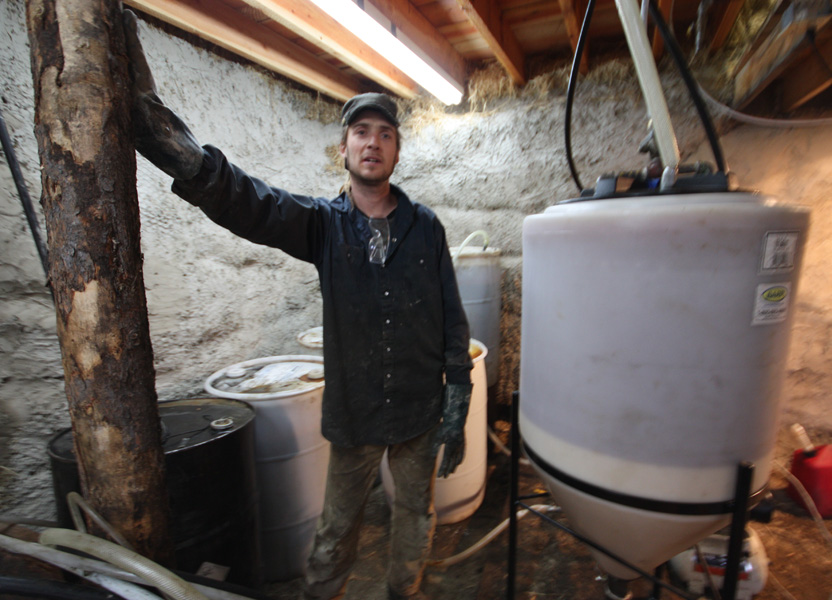 “I hate the way our dependence on fossil fuel has shaped our society and I’m looking for alternatives,” says Macdonald, a Dunster resident.

So, he creates biodiesel, a fuel made by processing vegetable oil with alcohol. Macdonald gets his used vegetable oil from several area restaurants. The resulting fuel, Macdonald says, can be used in any vehicle that requires diesel, but with a much smaller environmental impact.

The by-products of biodiesel production, Macdonald says, don’t dissipate into the environment, which is much safer for plants, animals and water in the surrounding areas. The greatest risk, he says, is to himself during production. He says he can badly burn himself when handling the methanol if he’s not extremely careful.

His interest in biofuels began in 2004, with a focus on using vegetable oil and conventional diesel to run his truck.

“I was kind of scared off by the handling chemicals,” he says, so creating biodiesel was not yet in the cards. “I didn’t figure I had it in me.”

Unfortunately, simply mixing vegetable oil and diesel isn’t so great in the north, he says. After freezing the fuel pump of his truck, Macdonald figured biodiesel was the way to go instead. Biodiesel is more than mixing oil and diesel; it is essentially combining vegetable oil with alcohol until it can be burned.

He looked at various books until one friend turned him onto journeytoforever.com, a database website with numerous, precise biodiesel recipes. This is where Macdonald found the recipe he now uses to create roughly 300L of biodiesel per week.

For the past year-and-a-half, he has been running his large Ford truck almost entirely on biodiesel. This means huge financial savings for Macdonald, who says he drives a lot and would be bankrupt if he ran his truck only on diesel.

Most of Macdonald’s property, in fact, is run on solar power and a biodiesel generator, he says. Other people in his area have also used his biodiesel.

“Anyone else who’s used my fuel has been very happy with it.”

But it took a lot of experimentation to get to this point, he says. And there were some unforeseen challenges.

“The bear incident that I had this summer was a good lesson,” Macdonald says with a laugh. The bear, attracted to the smell of the vegetable oil, trespassed into Macdonald’s workshop, creating what he says was a horrible, horrible mess.

“I noticed one day that the shop door was open and this barrel of oil was knocked over,” he says. “He got more and more stealthy.”

The bear could soon open the shop door, remove the barrel cap and drink the oil without much of a mess. “He just wouldn’t leave!”

Macdonald eventually solved the problem with an electric fence, and the work continued.

While he’s still in the construction phase, in time, Macdonald says he hopes to create a biodiesel co-operative. A few already exist in B.C. and hundreds exist worldwide. He says there’s the potential to expand as he’s probably sitting on three to four thousand litres of unprocessed oil.

“It’s always nice and easy to talk about lobbying governments to make changes to emissions,” he says. For him, creating biodiesel is his own way of lowering emissions.